Just seven kilometers outside of the city Kampot sits a tiny fishing village that I can only describe as one of the most peaceful and beautiful places I have ever set foot on.

Before coming here, I had spent a good amount of time in a village in the outskirts of Samrong, a village which had caught my heart due to its simple way of life, its uncomplicated-yet-breath-taking-scenes and most importantly – it’s inhabitants.
However, this new location managed to grasp my heart as well (even though I had told myself just a few days before that no place would ever be able to do so again after Samrong). 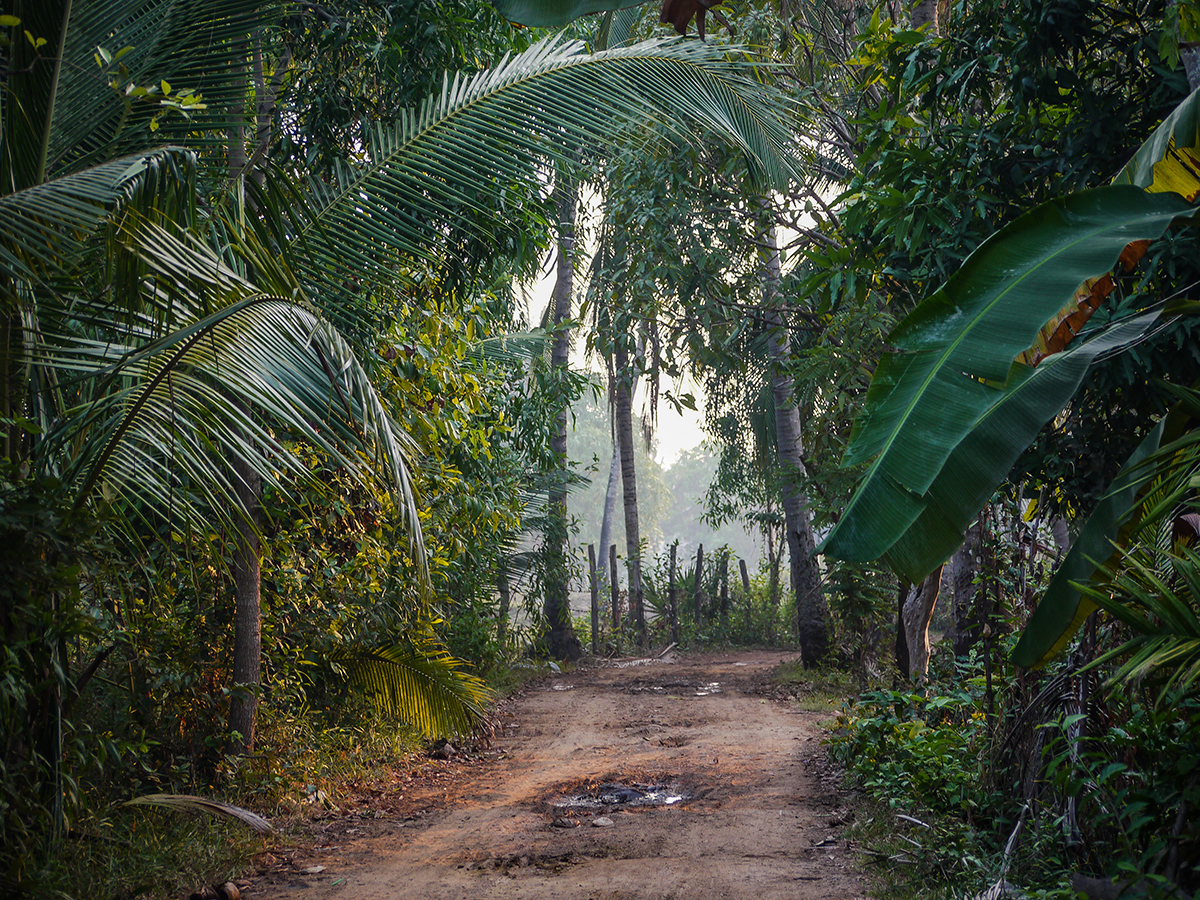 The entrance to the village 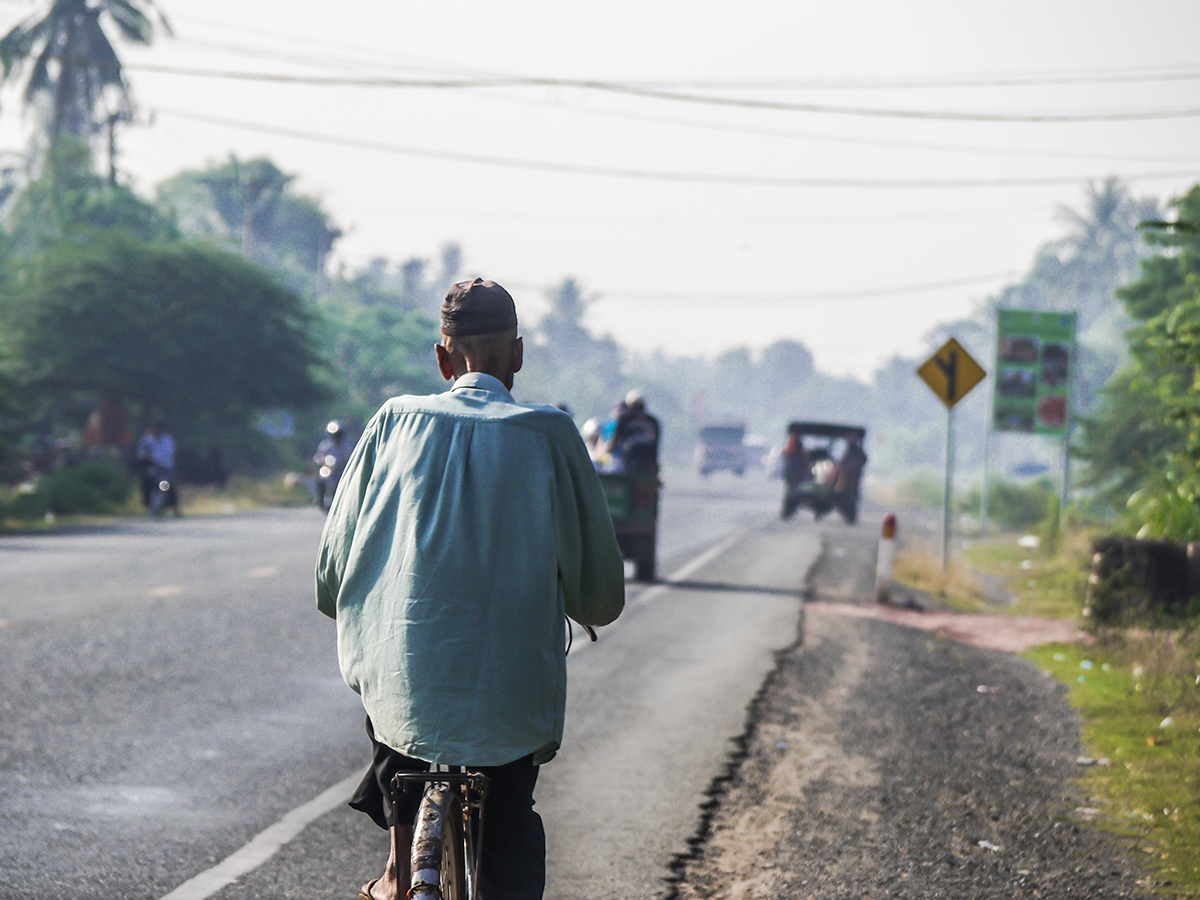 Spotted on the highway that leads to the tiny entrance to the village
It was different. It would be an unfair to compare them both. The accommodation consists of overwater huts about 300 meters away from the village. The huts are simple, but the best aspect of them is not what is inside but what you encounter once you step outside of your humble home – a river that runs to meet the ocean, mangroves growing amidst the edges of the huts, the villagers riding their bikes… 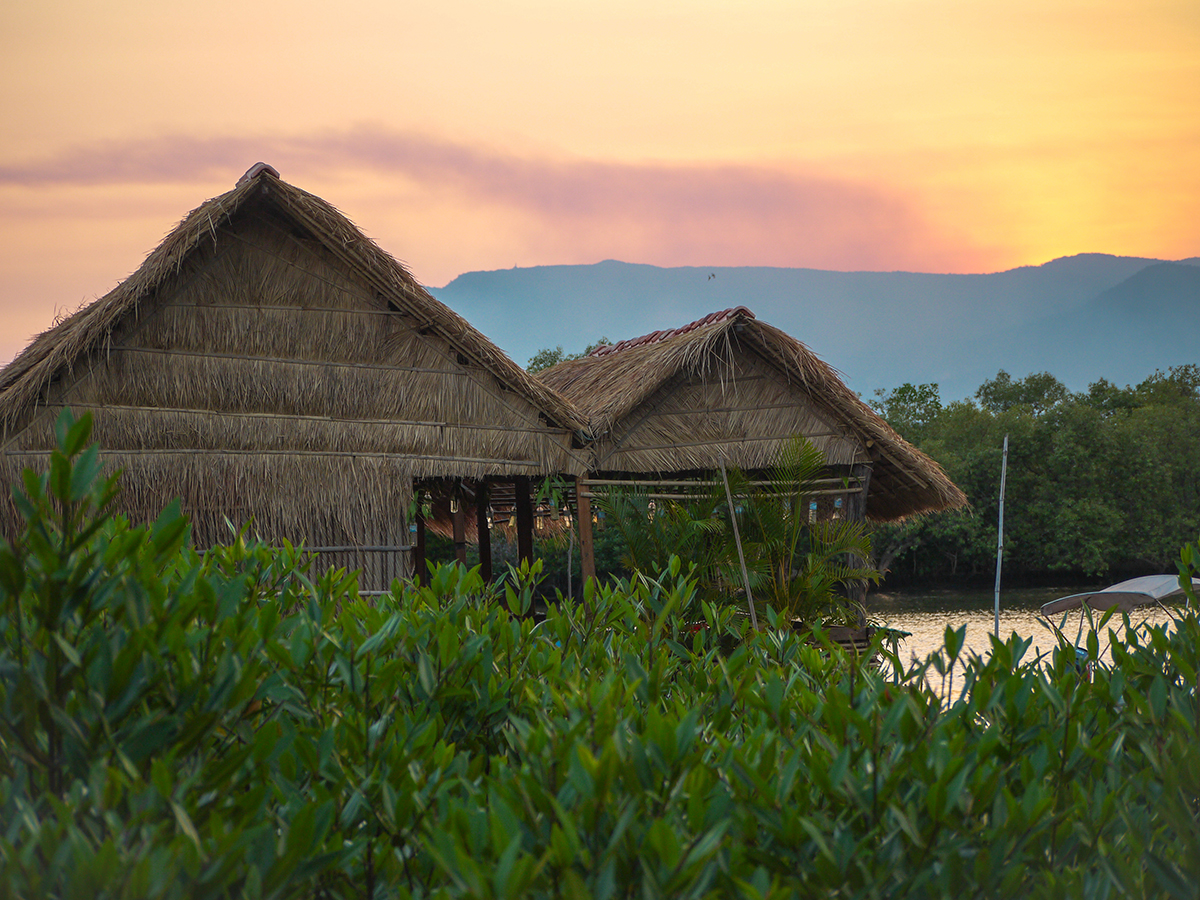 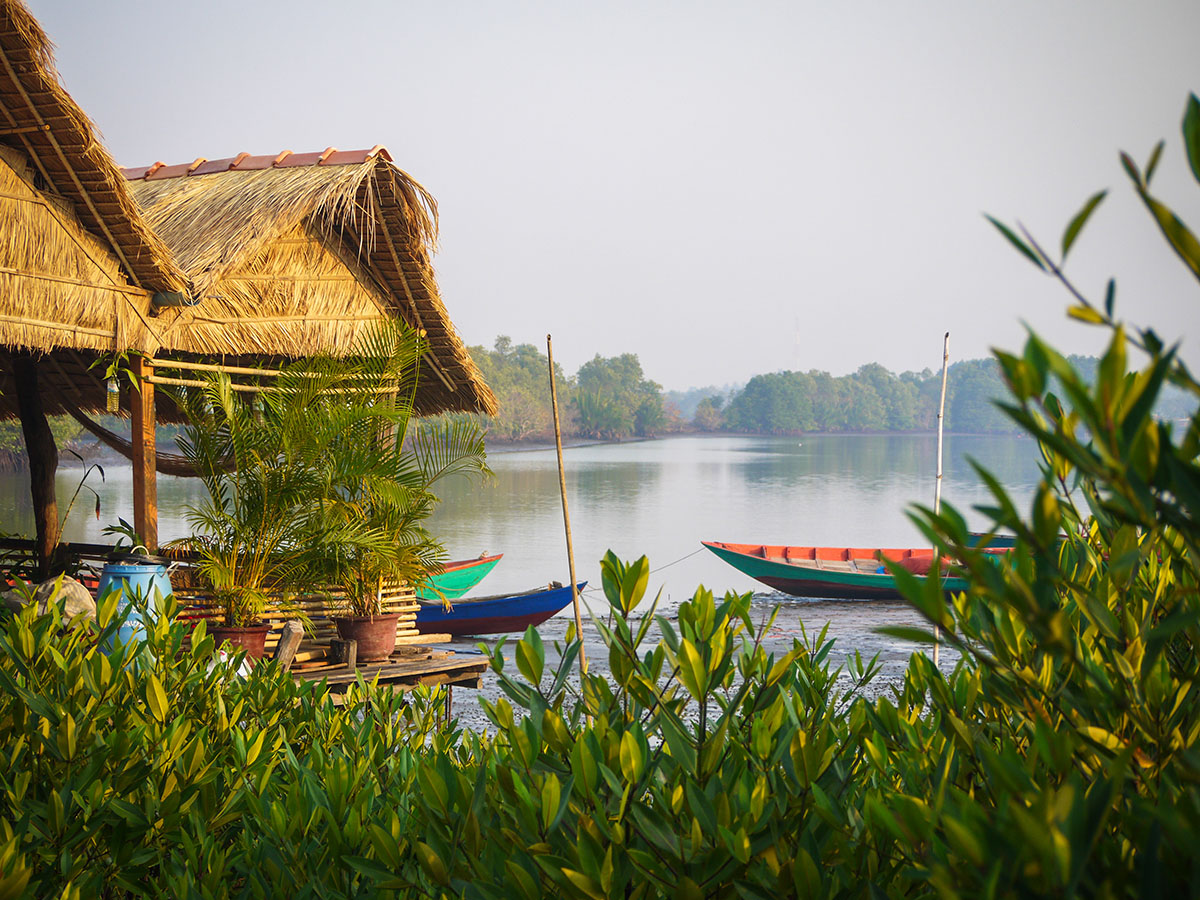 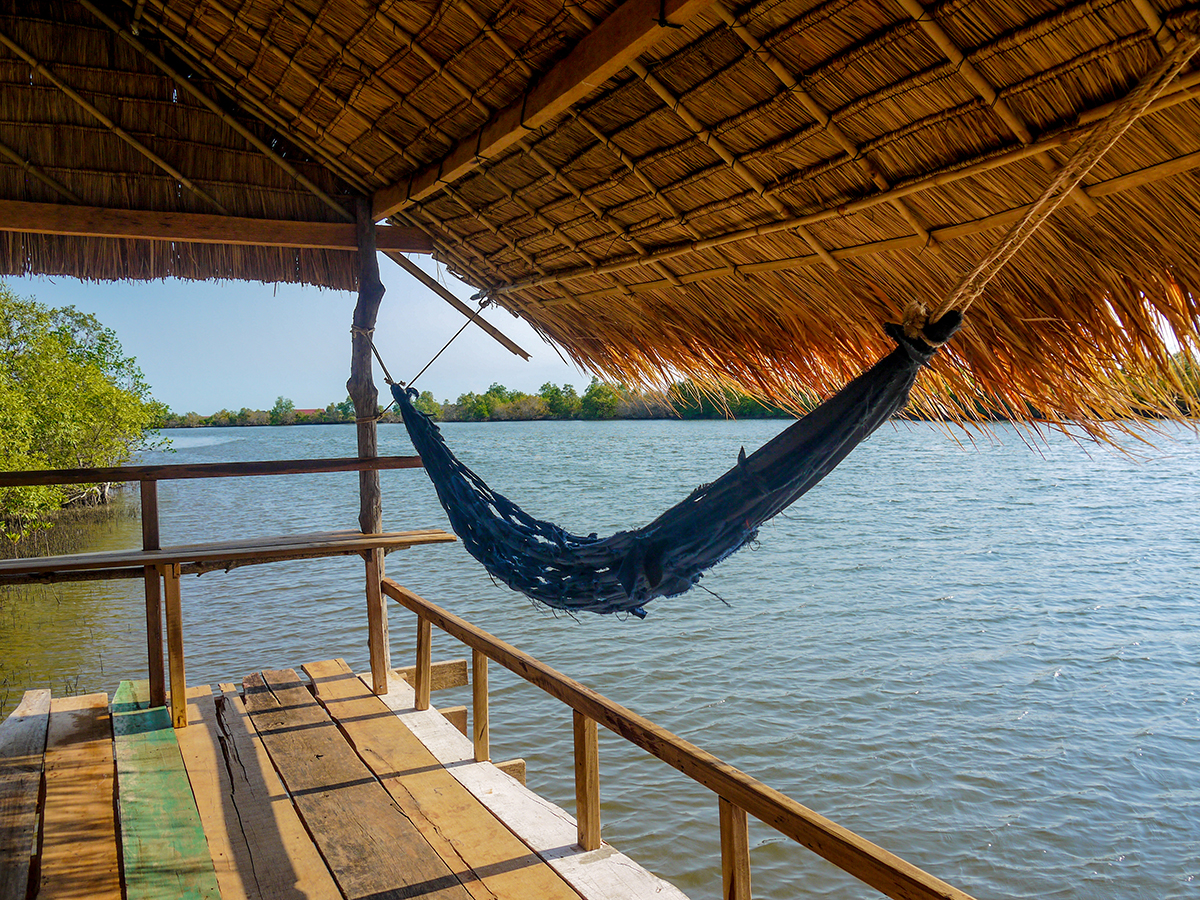 Void of wifi and every-day things we have grown accustomed of, being here was what I could only describe as unwinding and peaceful. It was here where I concluded that Cambodia was my favorite country out of all the ones I visited. The reason? it’s captivating countryside and its never-ending diversity.

Spending time here allowed me to see a different side of the country. And I learned – a lot. (I’ve always said that one of the things I appreciate the most about travelling is that it is, in a way, a form of education). 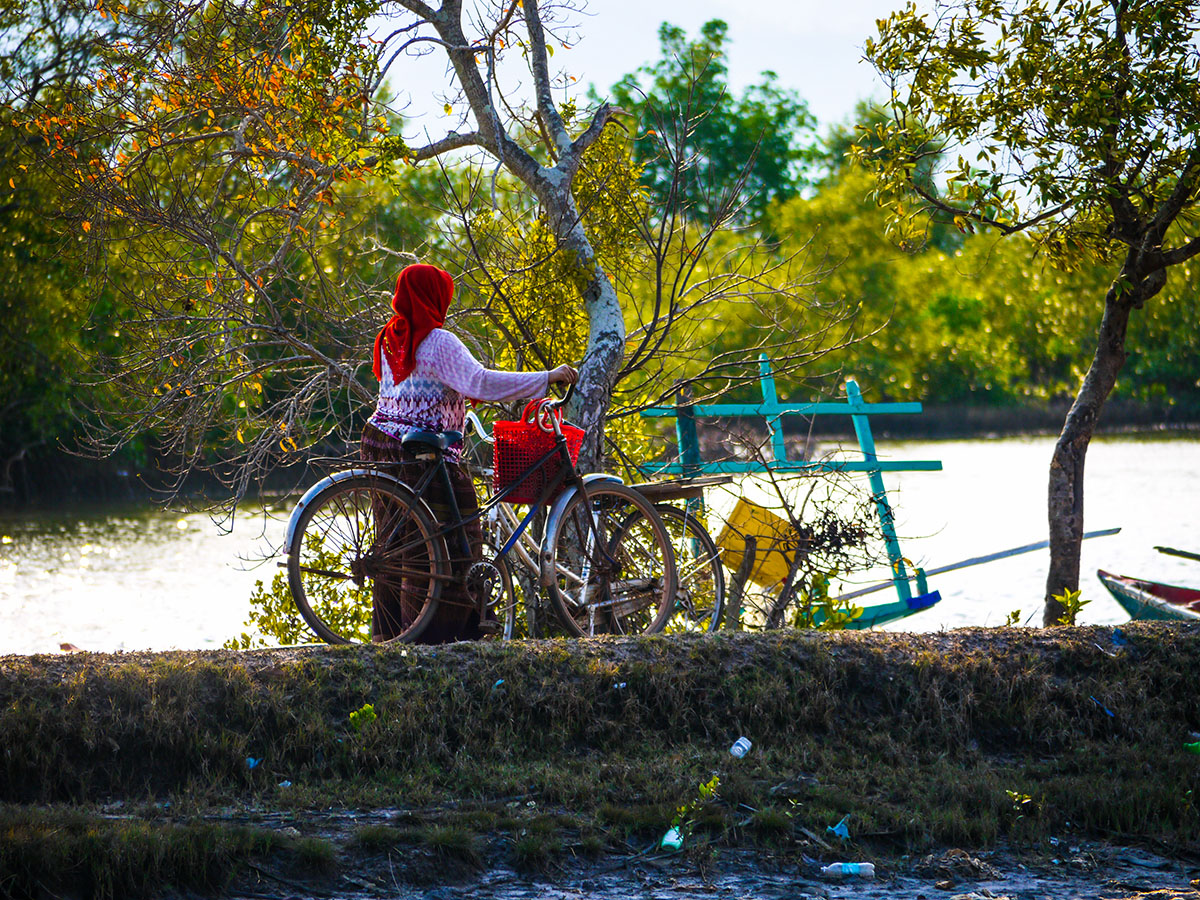 A woman parking her bike to watch the sunset

I’m ashamed to say that I had little to no knowledge of Cambodia before my arrival. I knew the basics, of course – about the Khmer Rouge, the French Colonization and the country’s turmoiled past. What I was not aware of is how much of a role Islam played in certain areas of the country.

This village was a clear example of it. I awoke before sunrise to wander around and observe the villagers going about doing their daily tasks – milking the cows, fishing, starting their boats, constructing their homes, etc. 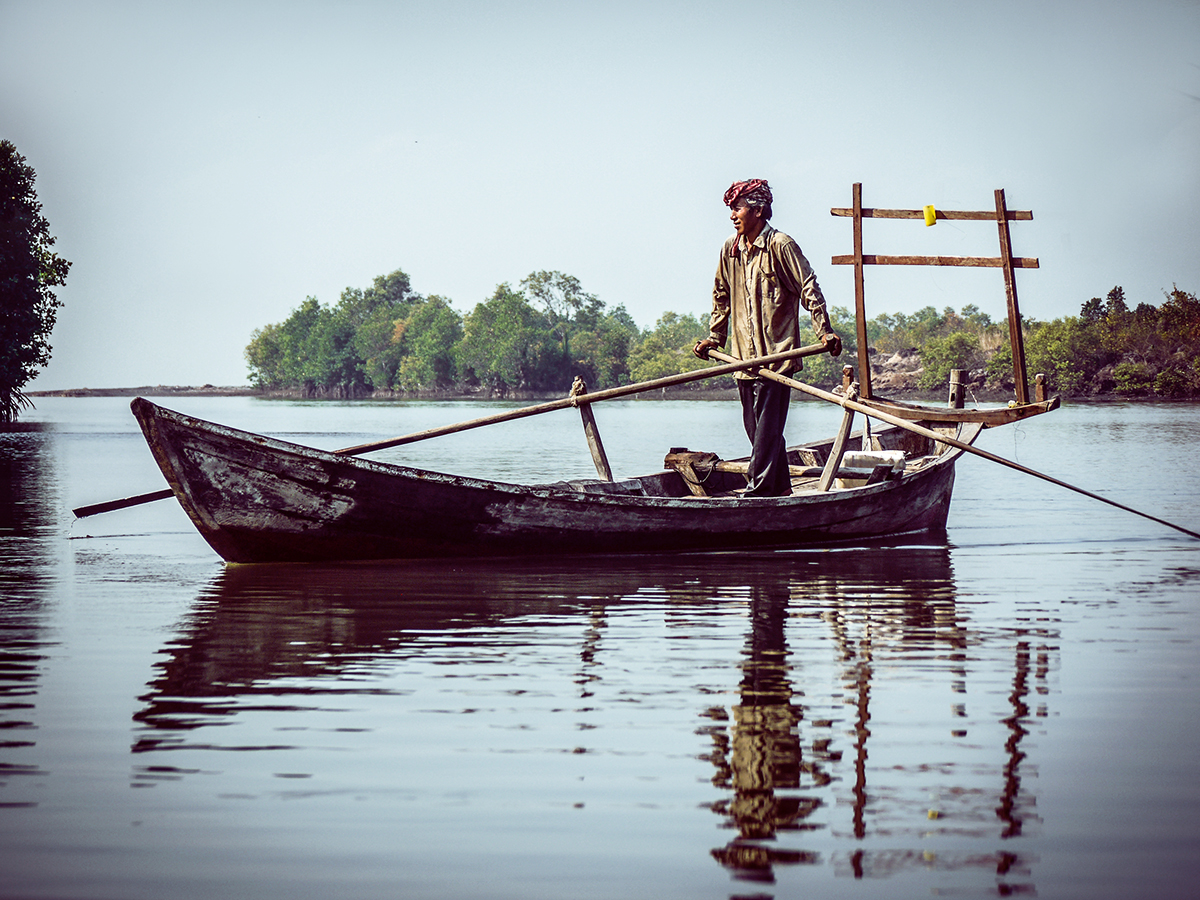 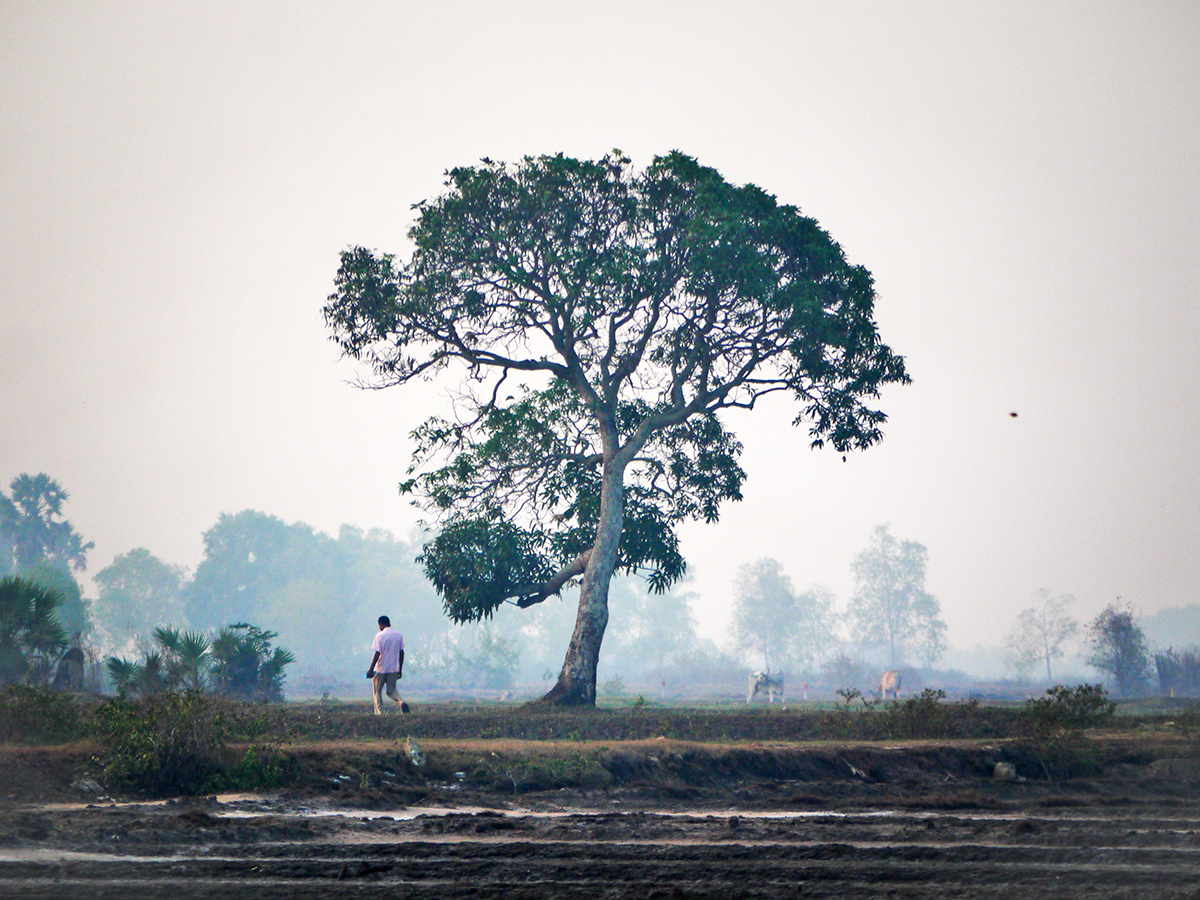 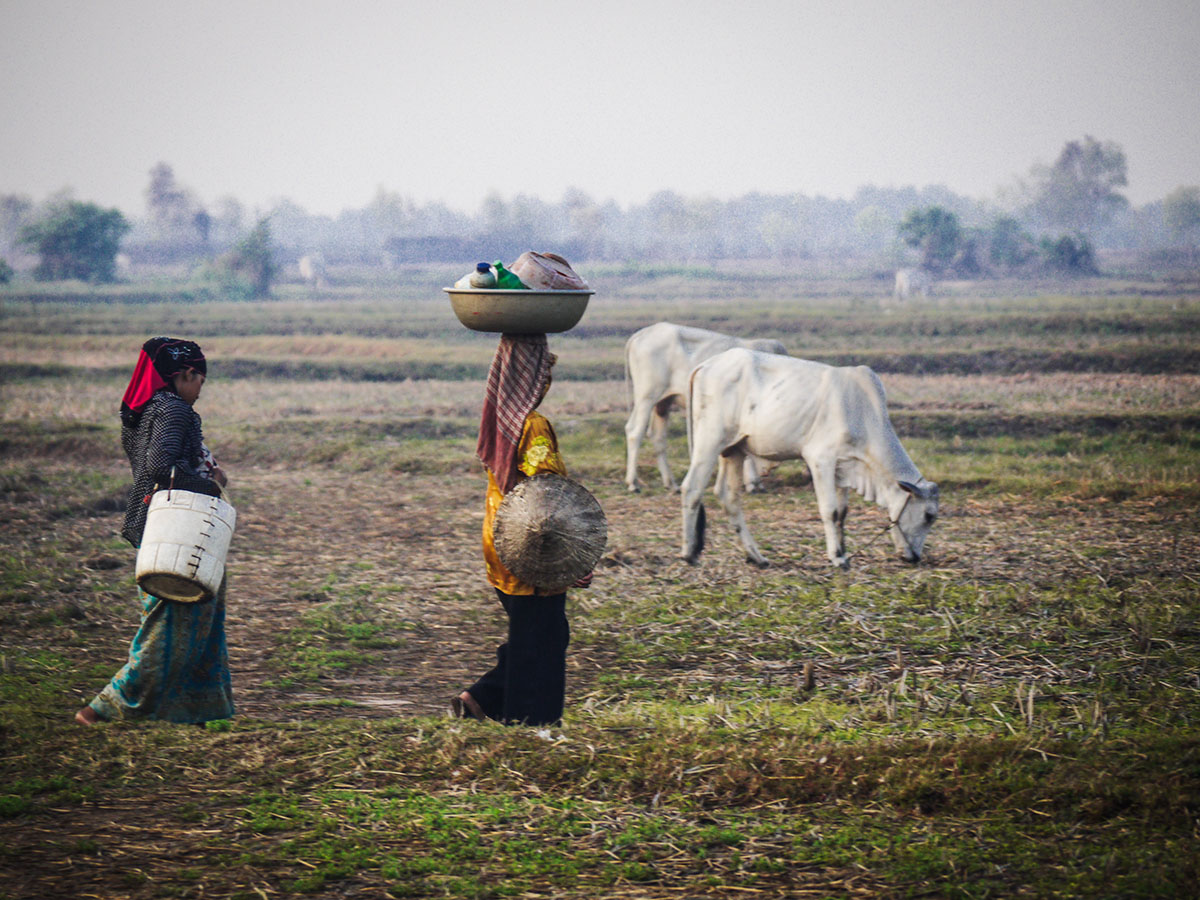 I later on learned that Khmer Islam is the religion of most of the Cham people and other minorities and that almost 2% of the population in Cambodia are Muslims. During the Khmer Rouge, Muslims (as well as Buddhists) were prosecuted and forbidden to practice their religion. This resulted in a severe decline. Today, however, they are free to follow their beliefs (and quite a few mosques can be seen in small villages as well as bigger cities such as Phnom Pehn). Sadly, my time here did make me realize many still close themselves up to the rest of the population by restricting themselves to life amongst each other. 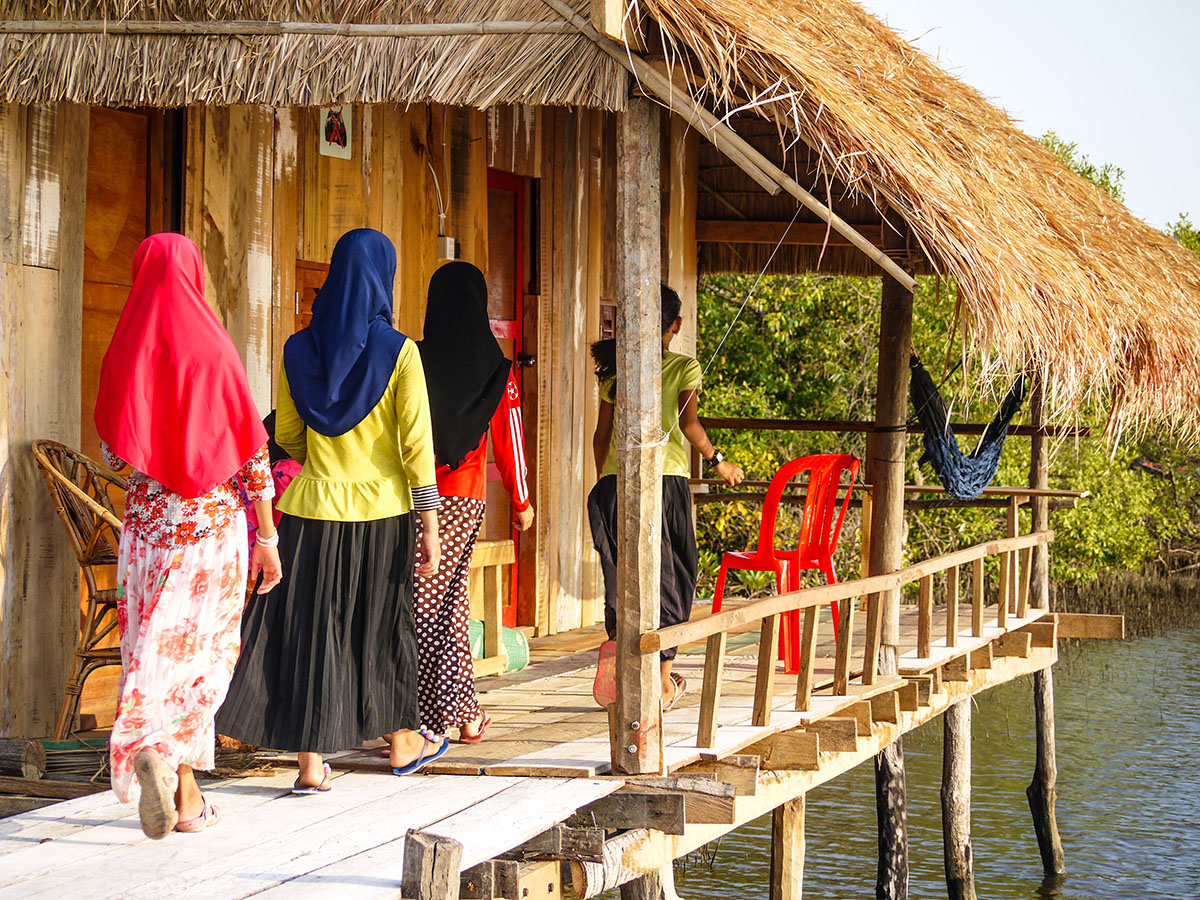 The girls hanging out after school

This tiny fishing village lives off the nearby delta. A lot of its inhabitants are either unemployed or have to travel kilometers to towns for work, where they earn $100/month at the most. Hence, the people living here depend on fishing for food.
Due to pollution and deforestation, the fish population has severely decreased in recent years, leaving people in distress. The whole village united to plant new mangroves alongside volunteers. The roots of these plants create an ideal nesting place as they protect the mother and its eggs from potential dangers. Thanks to their efforts, the nature of this place has flourished again along with its natural resources. 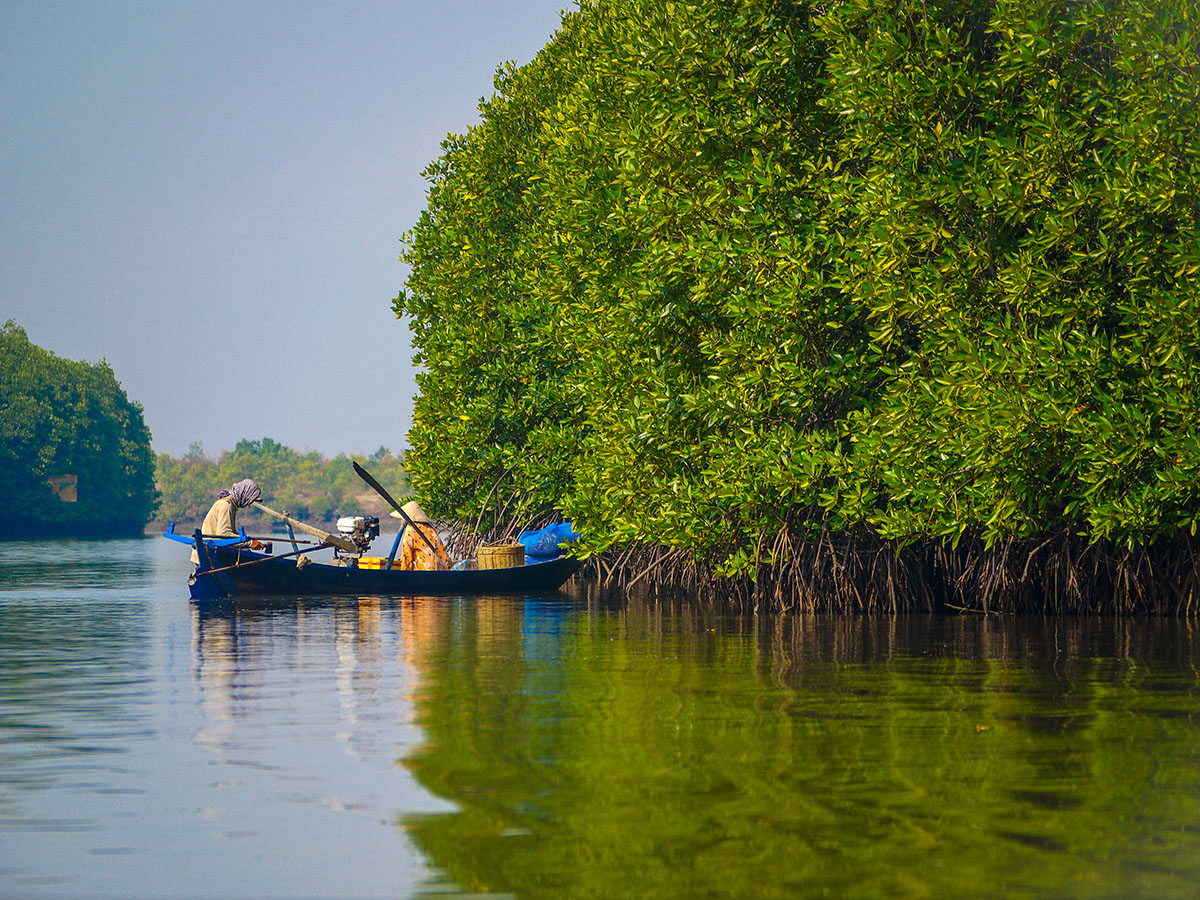 As nighttime approached, two volunteers arrived to the accommodation from Phnom Pehn. Lutfi, from Indonesia and Nan, from Cambodia. They were bound to stay there helping to plant new mangroves for a whole month.

After they had dinner, we sat riverside on the dock and watched the stars together – talking about anything and everything. We had just met a few hours before, but we were already comfortable with each other. 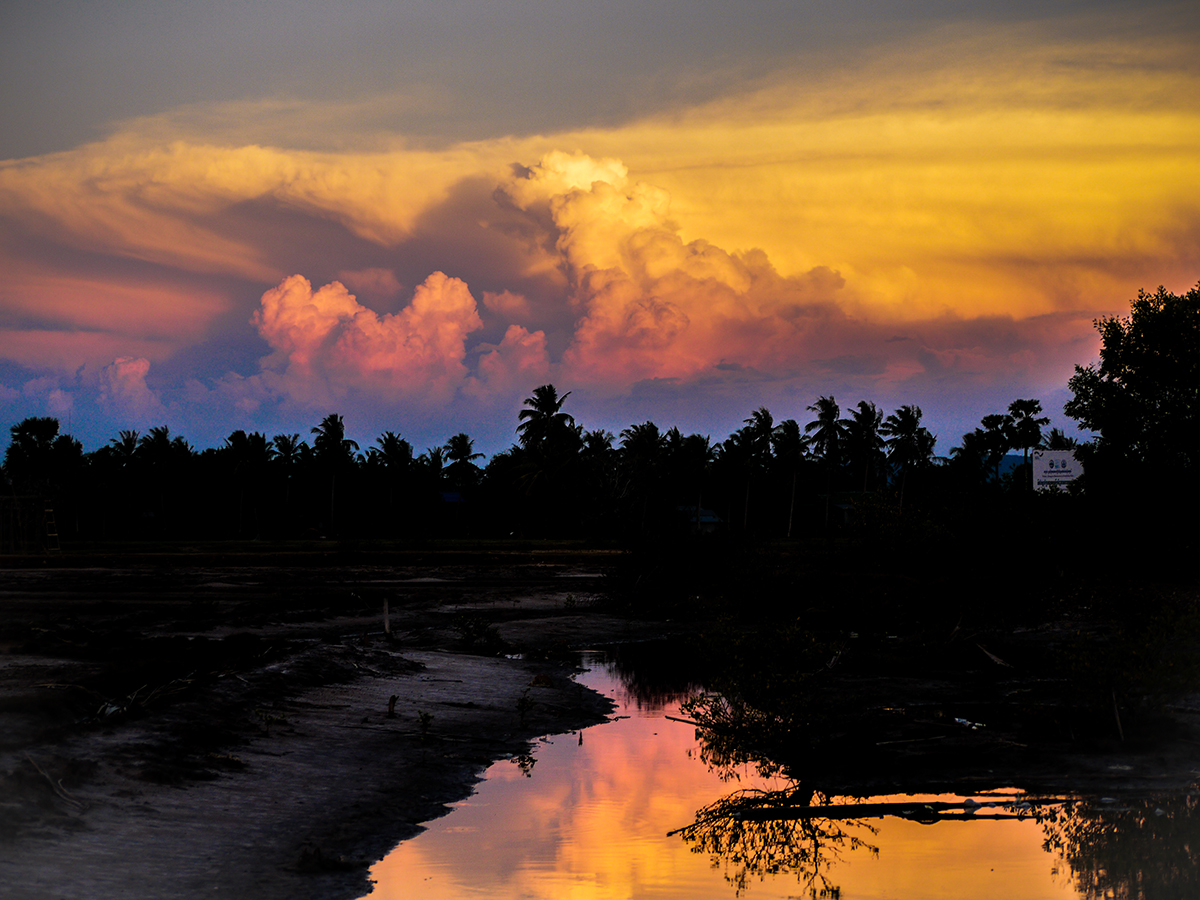 I realized how different our religious background were. Lutfi came from a Muslim country, Nan from a Buddhist area in Cambodia, and I from Mexico, which has one of the biggest Catholic populations in the world. There we were – bonding, talking about our fears and dreams, about our plans for the future and laughing… laughing a lot! We didn’t realize at the moment that we were making memories; we were simply having fun and enjoying ourselves. 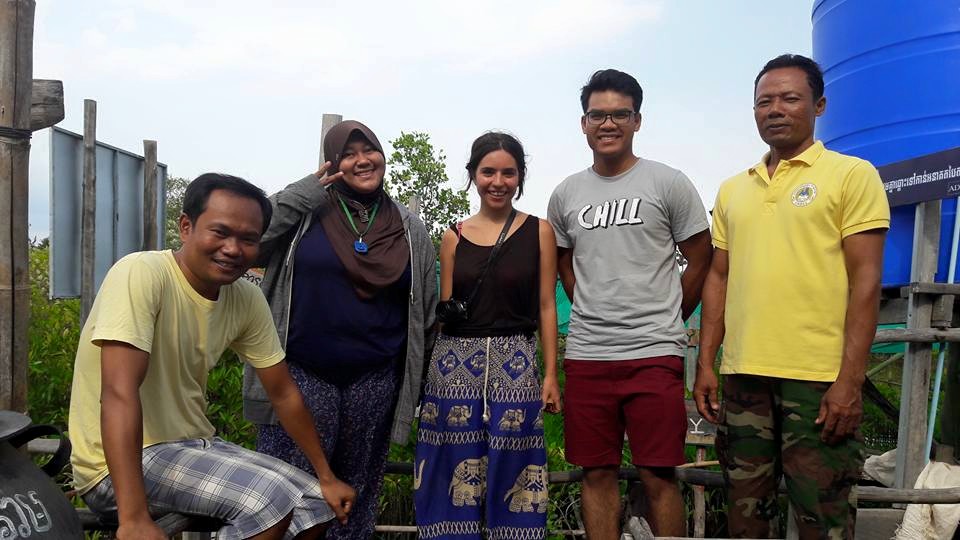 Despite all the problems the world faces today, how wonderful it was to realize that it is possible to coexist and forget the rest. That we are all beings living in the same world and that, the struggle for a common cause can remove borders.

Find out more on our Cambodia conservation project