I could barely feel my legs anymore as the jeep turned left from the paved highway.
And the road? Well, it wasn’t much of one anymore. The car was now winding its way through the bush while impalas often rushed through the landscape.

I was headed to a Maasai village in the middle of nowhere.

To get this opportunity to really visit an authentic has been one of the highlights of my entire life. I would have never been able to get here on my own without the right contacts, so it was really one of those moments in which I remembered how blessed I am for the life I have. Two hours later, and I finally made it.

The village was so tiny, consisting of a few local shops that sold the exact same things as their neighbors, a church, and a school.
And then there was my home for the week. The “fanciest” house in the village. There are no guesthouses there, but I had been arranged to sleep at a local family’s house for the week. While it was probably the most equipped house in the village and was made out of concrete, there were still no showers and the toilet was more like a hole in the ground inside a hut.
The house was solar powered, but it was too weak for even my computer to charge and my phone barely made it past 15% when I left it plugged for several hours. It was the perfect opportunity to disconnect, forget my to-do list, and just enjoy the bush. 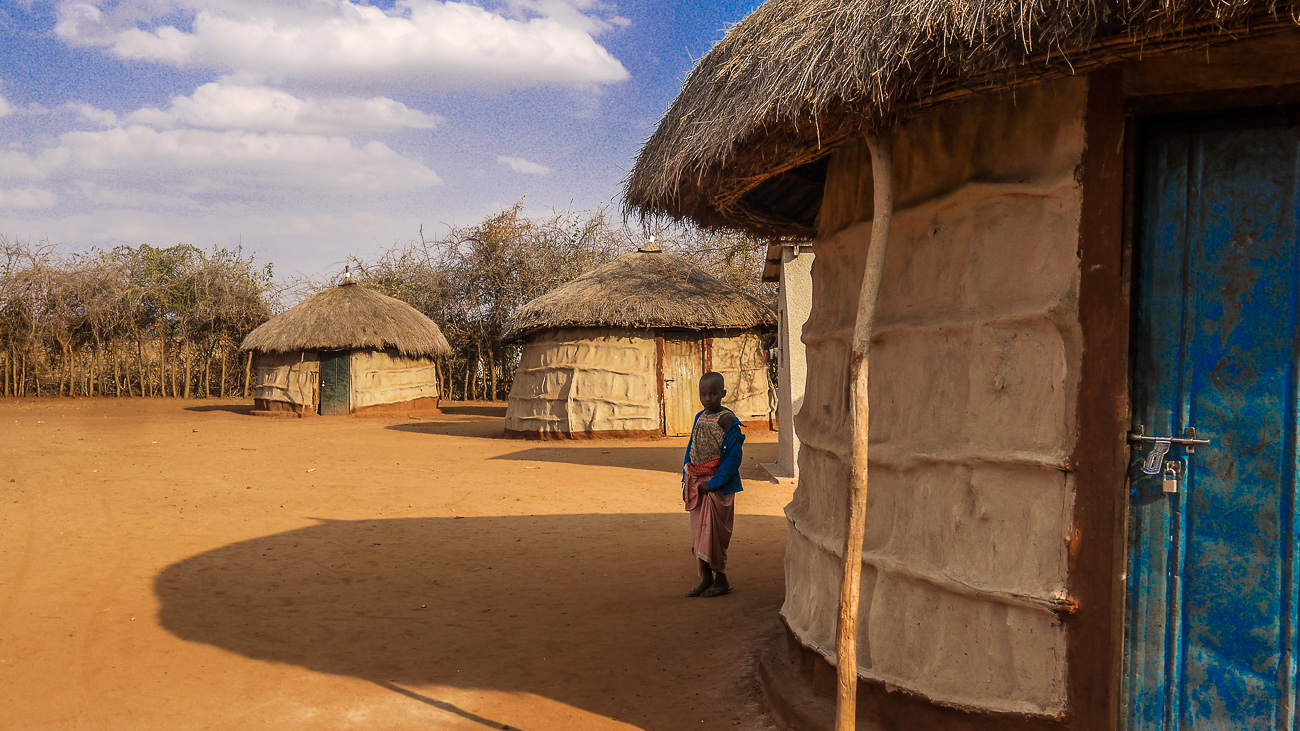 And guys! It was easily one of the best weeks of my life! If you have been to northern Tanzania or southern Kenya, you have inevitably seen Maasai men grazing their livestock on the road at one point or the other. I always found them so majestic, so powerful when I used to read about them in my geography class in middle school. To be able to experience this first-hand and just ask, ask, ask questions was otherworldly. 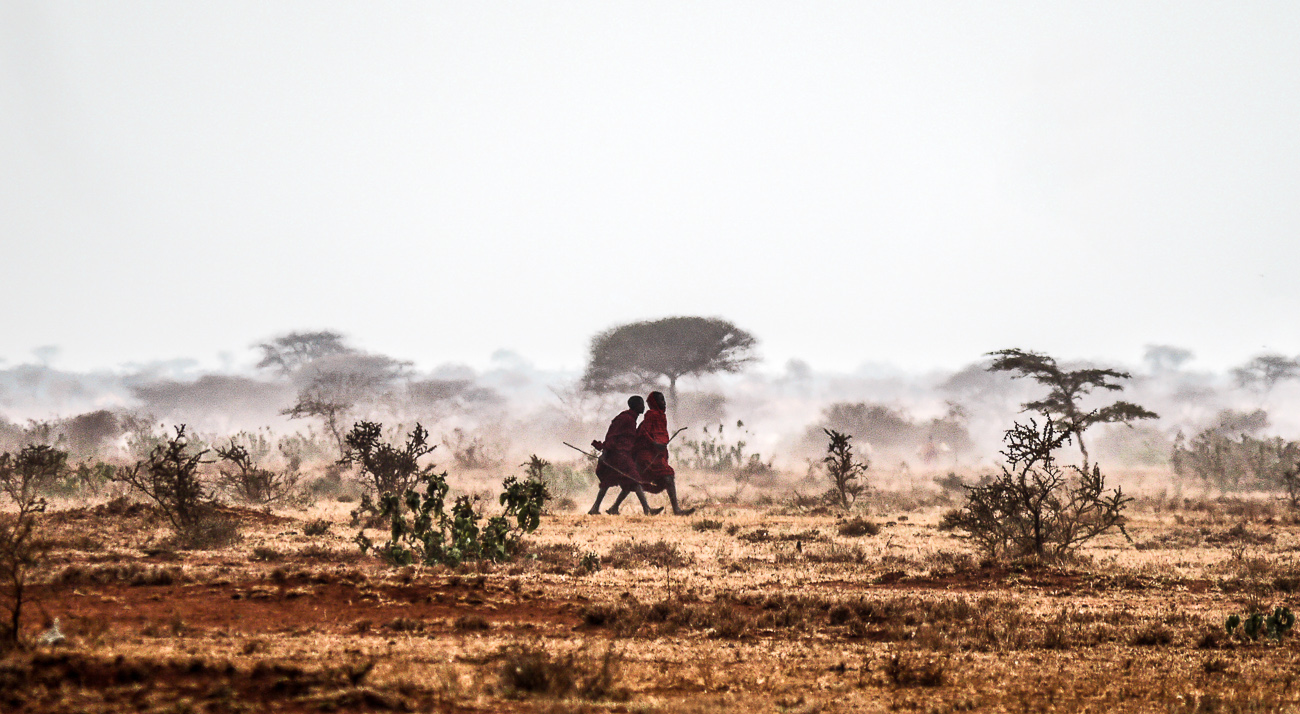 I think most of Africa is very misunderstood. The media loves showing footage and images of starving children, war conflicts, and people suffering because there are no reliable water sources nearby. And, while this might indeed be a reality for many, it is not necessarily true to the whole population. Remember, Africa is huge and it is unfair to generalize it. But even then… the Maasai in this region DID struggle to get water. During the rainy season, there is a gigantic river nearby (and by nearby, I mean four kilometers away), where they can go to fetch water for every possible use. During my visit, this river was completely dried up. So, instead, the women (because it is a woman’s task in Maasai society to do so) would walk ten kilometers with their donkeys to get to the nearest borehole and bring water home. 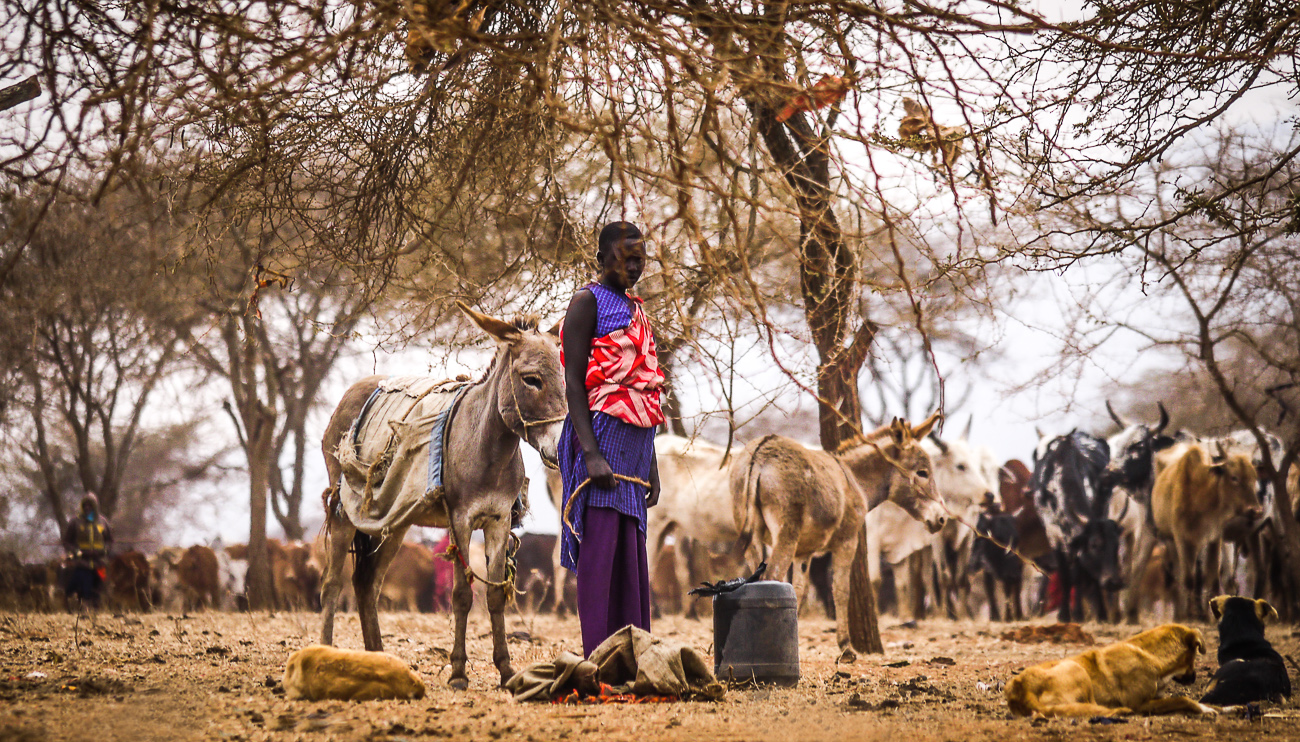 But you know what? They didn’t seem sad. The borehole was surrounded by giggling women telling the latest gossip while filling buckets with water that were later charged on their donkeys. Laughter all around. 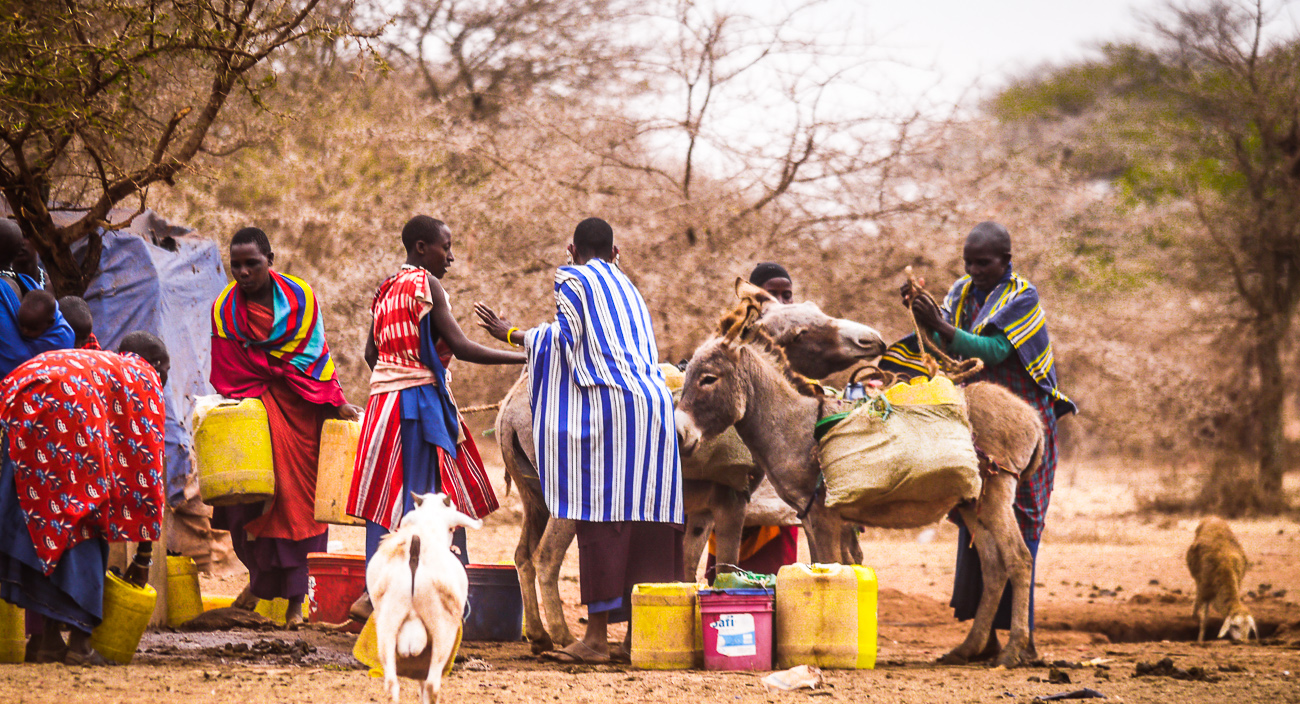 And then there are the men, who are in charge of the cattle. A bit closer than the borehole was, I walked to the forest where the river once stood. It was easily a ten-kilometer walk before I saw Maasai men digging up gigantic holes in order to get to the water underground. This was all done to give their cattle something to drink. Yet, the media will show you this image, and the viewer will feel pity for them: 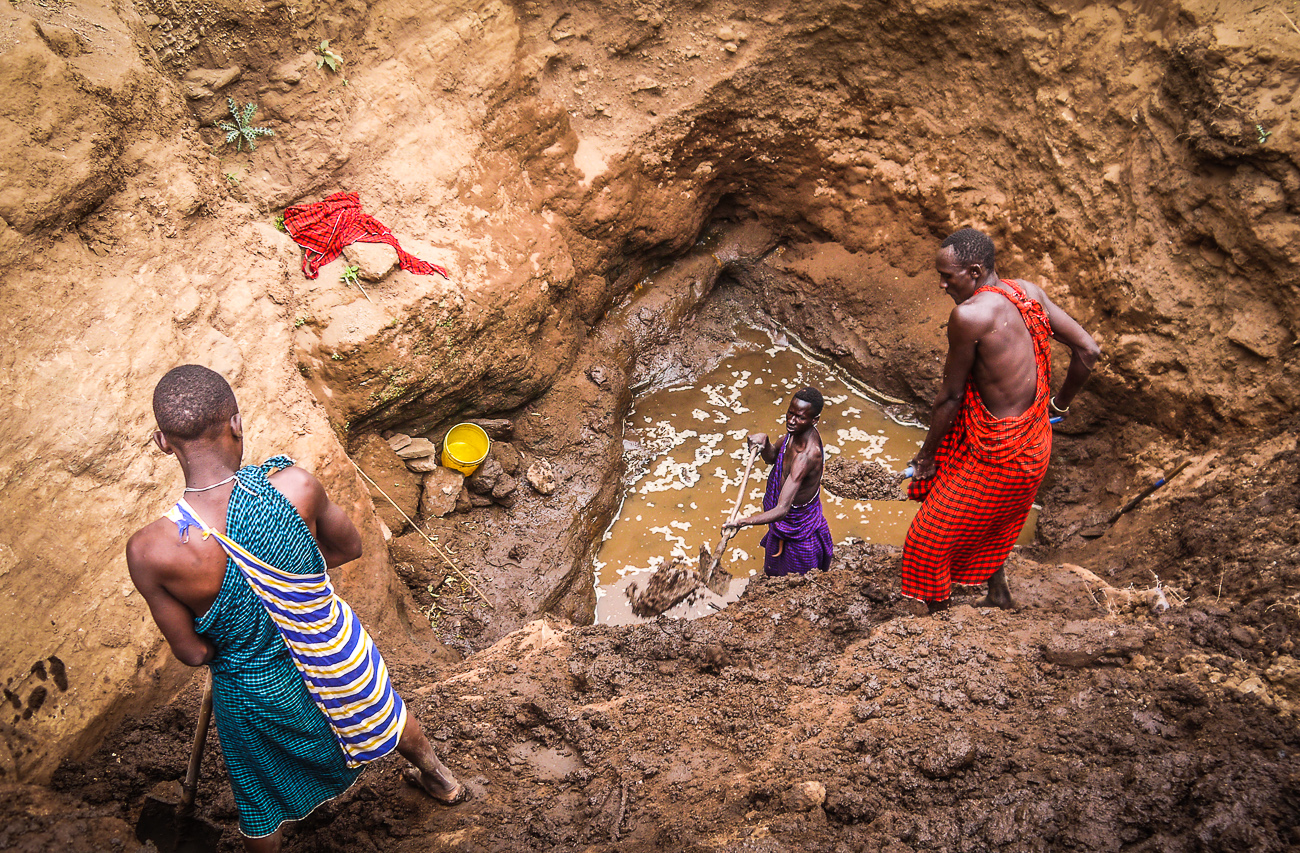 The reality, though? Two of these men were educated at a university level. They work in town but return to the village whenever possible because they simply like the environment and the slow pace of life. I mean, get this: You see this photo, but seconds later the guy at the top took out his Samsung Galaxy to take a selfie while working! 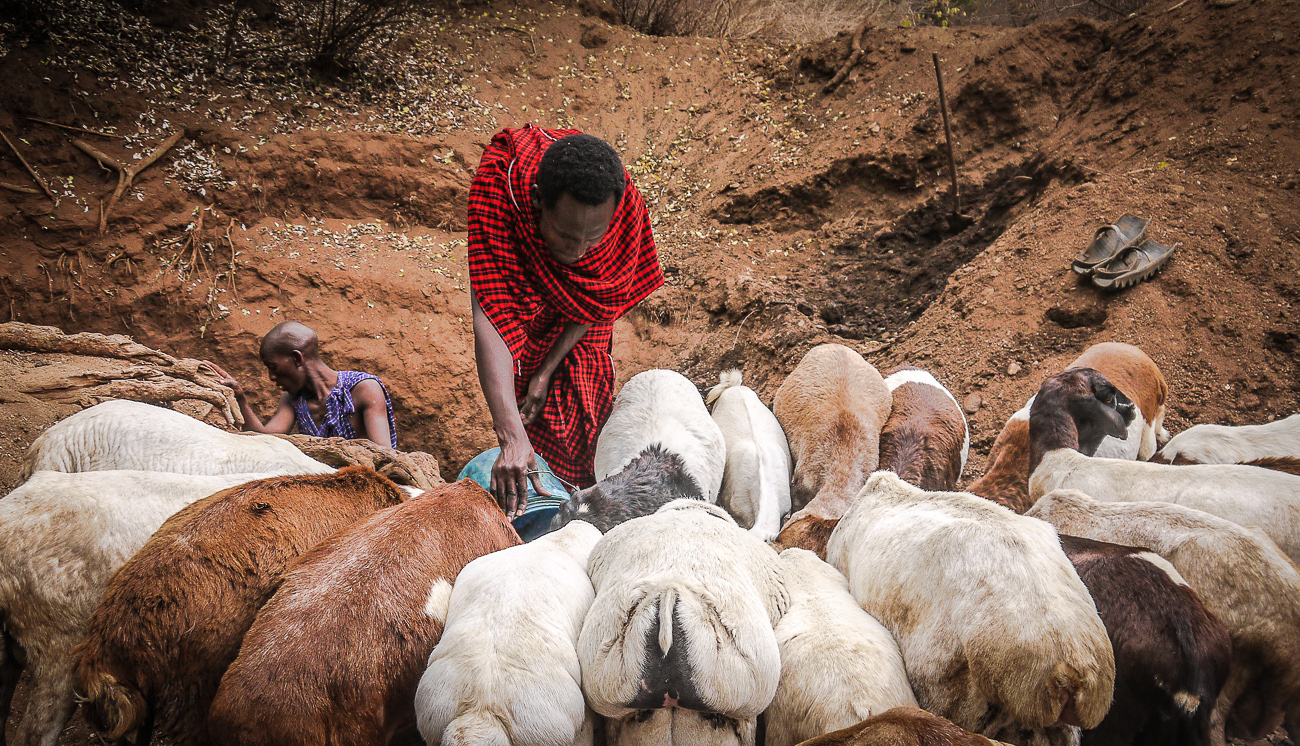 I was so impressed at how much the Maasai care for their livestock. I mean, sure, they eat some of them at some point, but they have super happy lives before that. The men graze them for a whopping twelve hours a day, from 6 am to 6 pm! And oh, dear, one thing that really shocked me was seeing five-year-old children grazing as well, in you know… the bush. At that age, I couldn’t even be left alone inside the house. The biggest group of goats I saw consisted of more than FIVE HUNDRED and they were being led by two children and a dog. Woah! 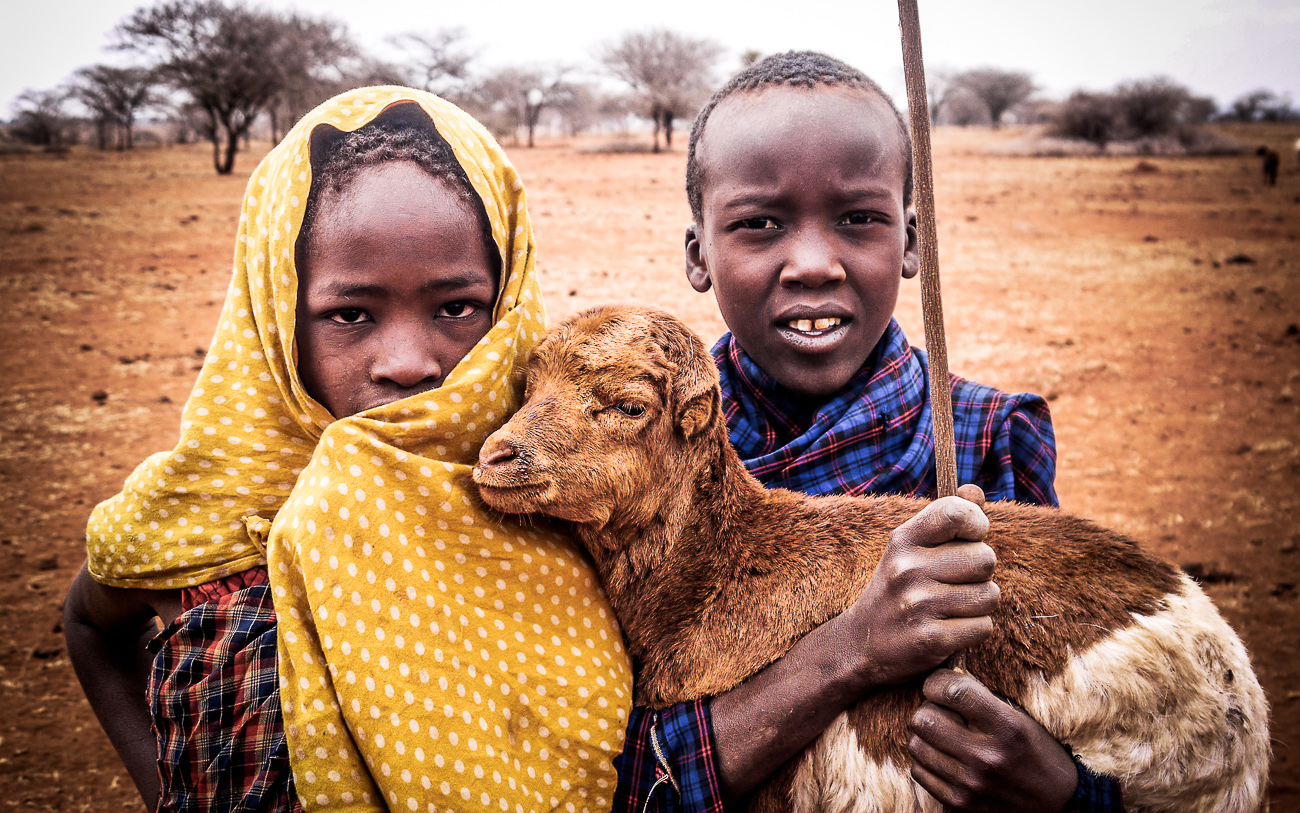 This baby goat refused to walk and the little boy kept pushing him to follow the group. After a few minutes, he gave up and decided to carry him ? I’d go on long walks every day in the bush – each day towards a different direction, partly for work, partly to see as much as possible, and party to train a bit to hike Mount Nyiragongo. On these walks, I would often stumble across impalas and ostriches running around, unaffected by the presence of humans. One time, I even saw TWO groups of giraffes! 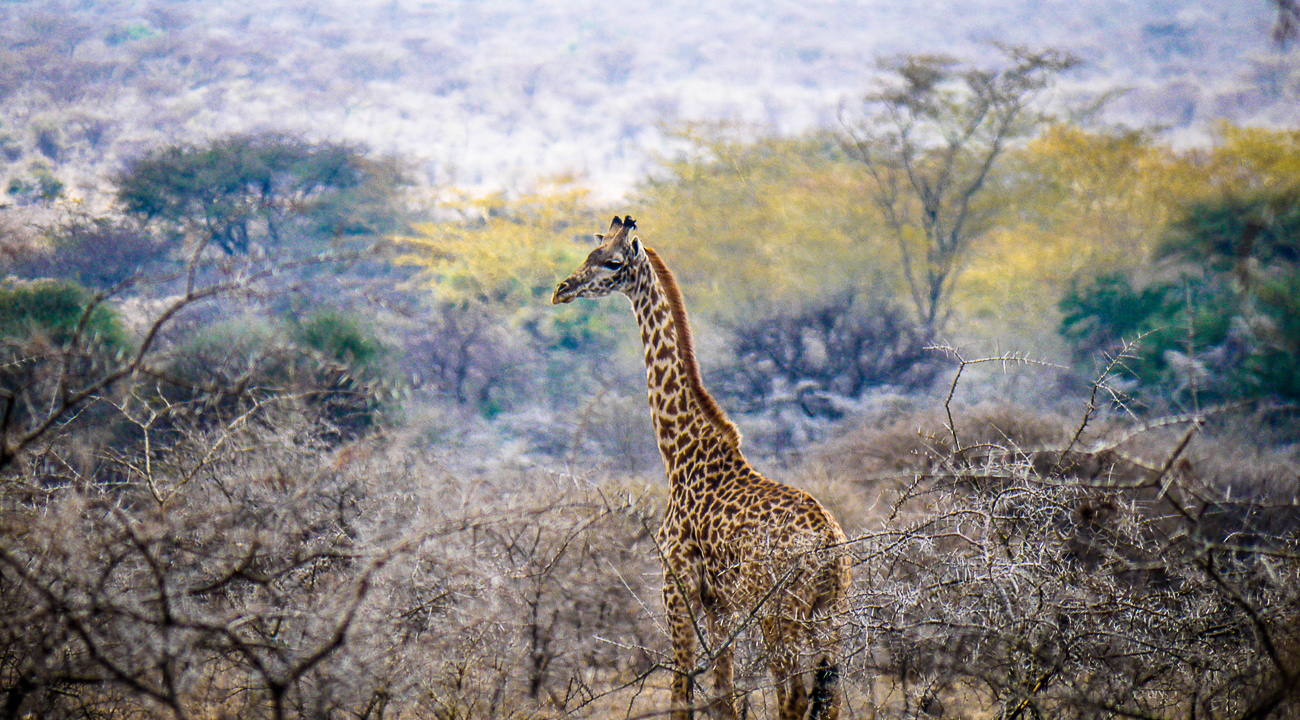 I’d cross paths with groups of Maasai grazing their animals or walking alongside their donkeys back to the village with fresh water. Each and every single one of the people I came across with was curious to learn about me and incredibly welcoming – the children would run towards me to bow their head, as it is in their culture to greet an elder in this way to show respect; in return, one must touch their head back. The women would often offer me their jewellery, without asking for any money back. The men would love telling me stories about the time they fought against a lion or a cheetah who came into their boma to eat their goats. Apparently, it is not an uncommon occurrence here and even during my time here, there were two men in the hospital as they had fought against a lion just the week before – insane! I mean, imagine this: “How was your weekend?” “Oh, fine, I just had to fight a lion, but everything’s chill like always.” 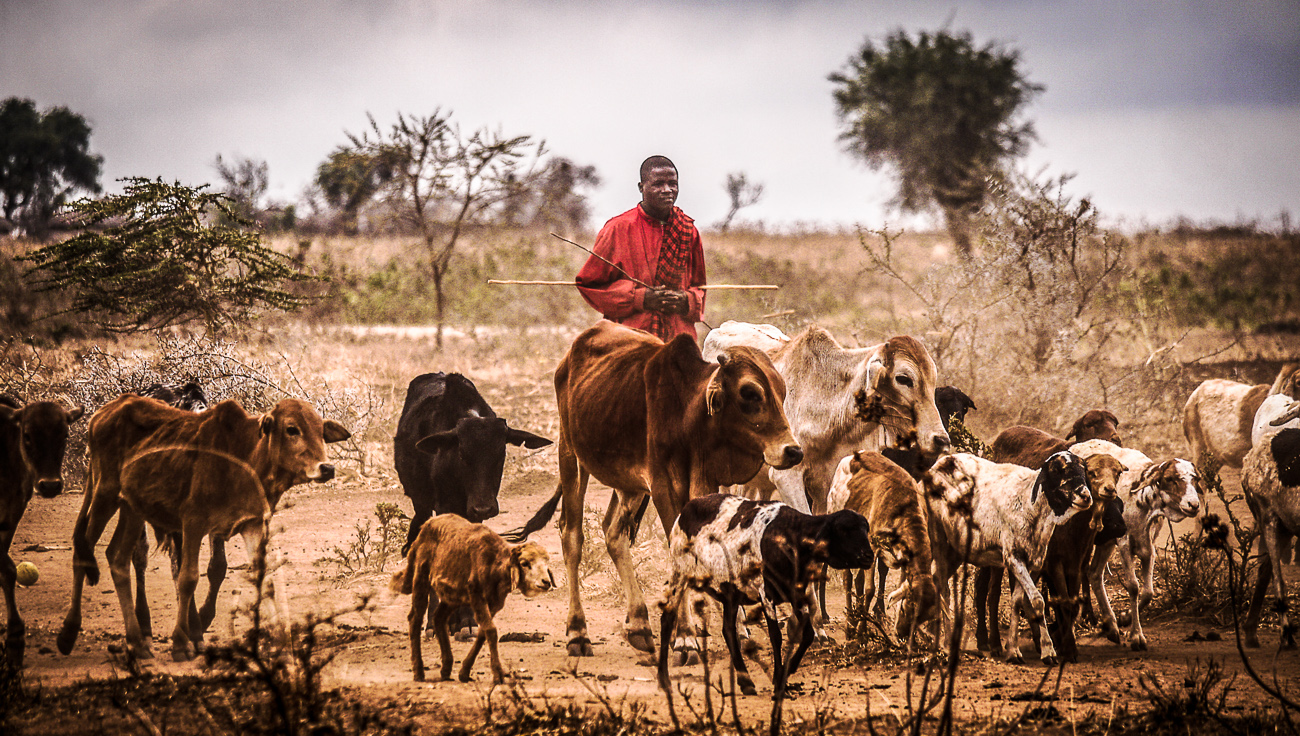 Being here brought my faith back to Tanzania. I had hated the country since the first time I set foot in it the first time around back in May this year. Everyone charged me double for things, everyone pretended to be my friend just to ask me for money, later on. Everyone just saw me as a walking ATM machine and I despised it. When I went there and discovered that there is another side to it, that Tanzanians can be incredibly warm people. I can’t wait to come back to this tiny village where everyone lives happily and their joy is shared, where everyone knows each other, and where the story-telling is out of this world. 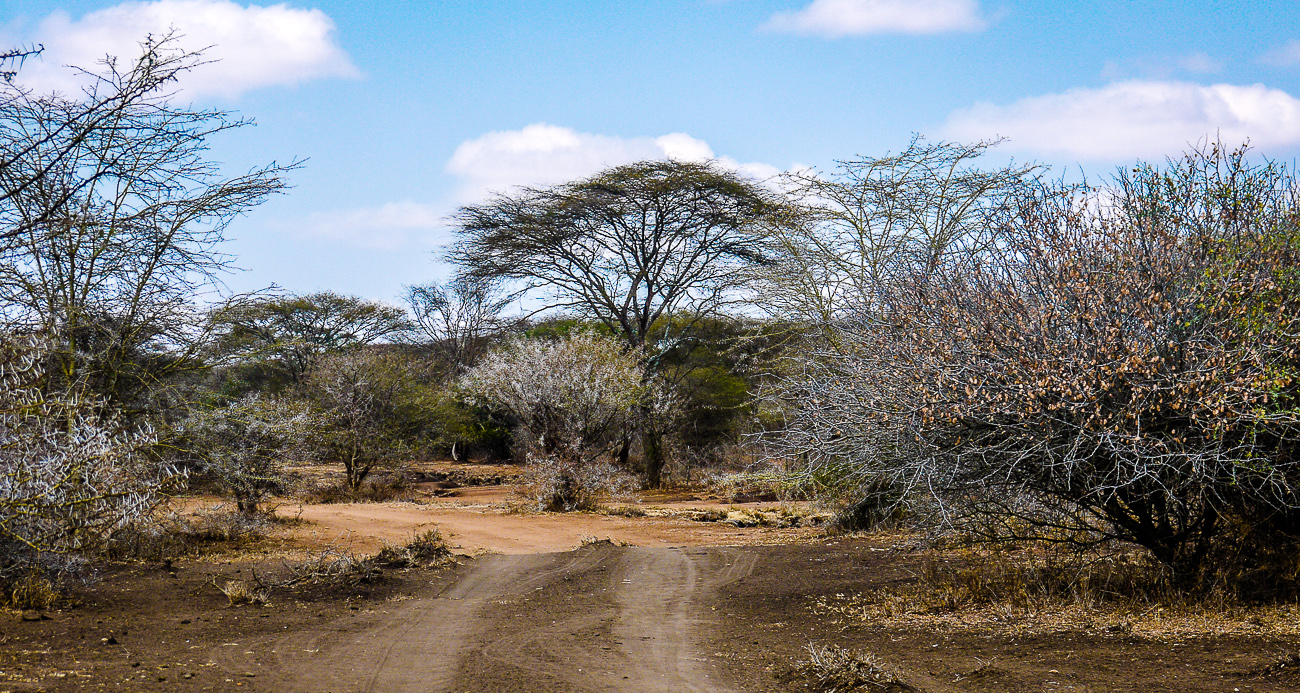 My only concern while here was getting eaten by a huge cat and never being heard of again, but they never really target humans (apparently our meat has a bad taste) and they rarely get close to inhabited areas as they are more scared of the warriors than they are of them. I was told my Kinaru that they fear the color red, as this is the color the warriors wear. He did, however, carry a huge knife during his walks in the bush, so er… yeah.

But still, most attacks happen to the livestock, when they go on their grazing walks. We walked past a tree near the river, where Kinaru stopped and told me “I was grazing my goats here once when a leopard appeared and killed two of them” *gulp*.
While here, everything was a highlight, but my favorite moment was meeting a warrior. I was walking through the savanna when I spotted him walking towards my direction – it was one of the most serene moments I have ever witnessed. He barely spoke English and was very much an introvert from what I gathered, but he allowed me to photograph him. 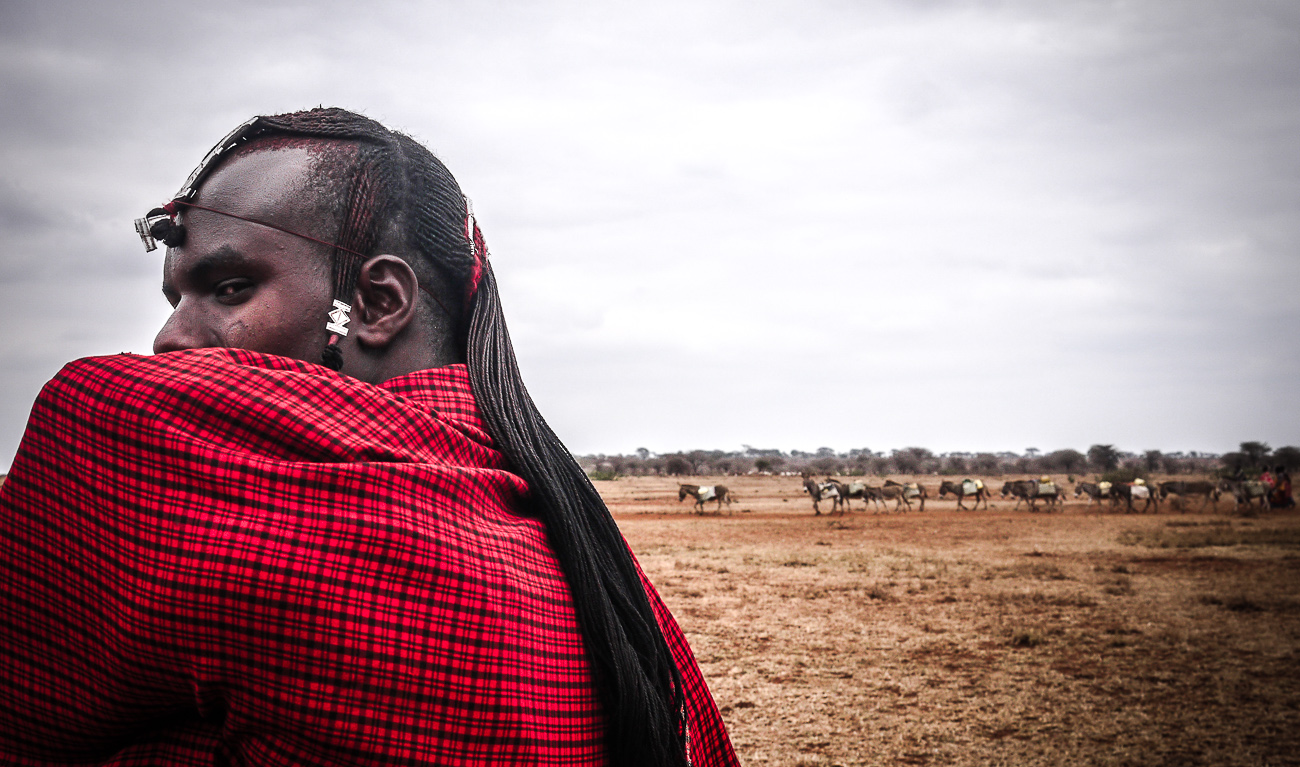 Warriors have a huge responsibility in their communities: to protect the livestock from predators and taking the cattle to pastures during the dry season (since the 90’s, the Tanzanian government passed a bill that does not allow complete communities to move around like they used to. The Maasai have had to choose a place to live in permanently, despite them historically being known for their nomadic lifestyle. However, the men are allowed to take their animals away for months to find greener lands while leaving their families behind). Every young Maasai man will become a warrior when he reaches a certain age, but he must prove their bravery to the community first. To do so, they all undergo a circumcision ceremony. The healing takes a month, in which they will dress in black. Once this period is over, they are officially warriors and they will have this responsibility for years to come until they are old enough and younger Maasai take over the “spear”. 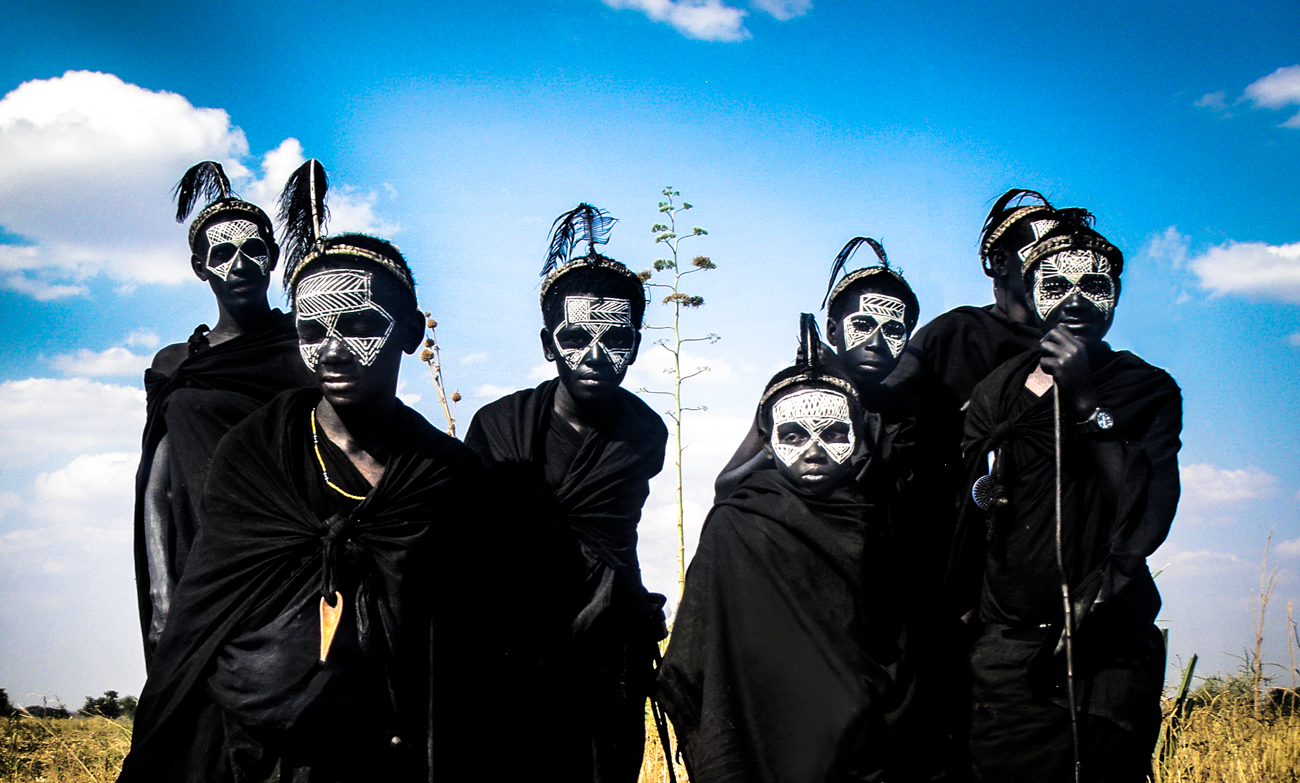 I wish I could properly word everything I was able to experience during this week, but I find it impossible. It is something one must live themselves in order to be fully able to understand just how amazing it is to get so immersed into such a different way of life.

Find out more about our Tanzania projects…