As in other parts of Asia, elephants have traditionally been used to work with humans in the logging industry. In 1989, however, this industry was banned in Thailand due to deforestation and thousands of elephants were put to work in the tourism industry.

The new reality for this gentle giants became carrying tourists on their backs, performing at circuses and walking the streets of big cities alongside their mahouts to beg for money.

While it is an unforgettable experience, the burden of carrying tourists greatly affect an elephant. Despite, their large size, an elephant’s back is designed to carry a maximum weight of 100 kilograms due to the shape of their bones – the chair used for tourists to sit on weighs 50 kg alone! That and, they are often malnourished and work over ten hours per day.

The fate of many of these ellies became outrageous and help was needed.

The sanctuary was founded in 2008 to provide a better life for these creatures. Today, there are 16 elephants residing here. Meet them! ? 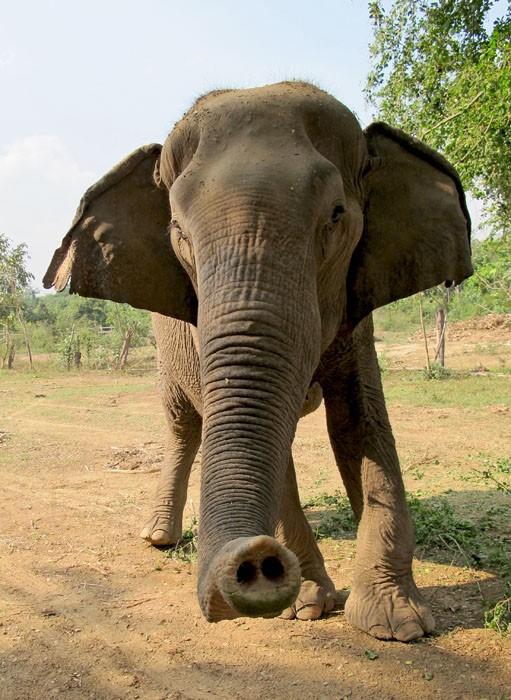 The oldest elephant at the sanctuary. Unlike most elephants who live here, Aum Pan does not come from a tragic working past. Her owner, Bok Chanthima, donated her to the sanctuary so she could spend the rest of her life living in a safe environment and surrounded by other friends. Despite being the oldest elephant here, she still looks very healthy and is fatter than the average elephant!

Her human family still visits her to check on her and bring her gifts (fruits). She loves to eat leaves from tamarind trees and to swim in the river.

The meaning of the name: Amber 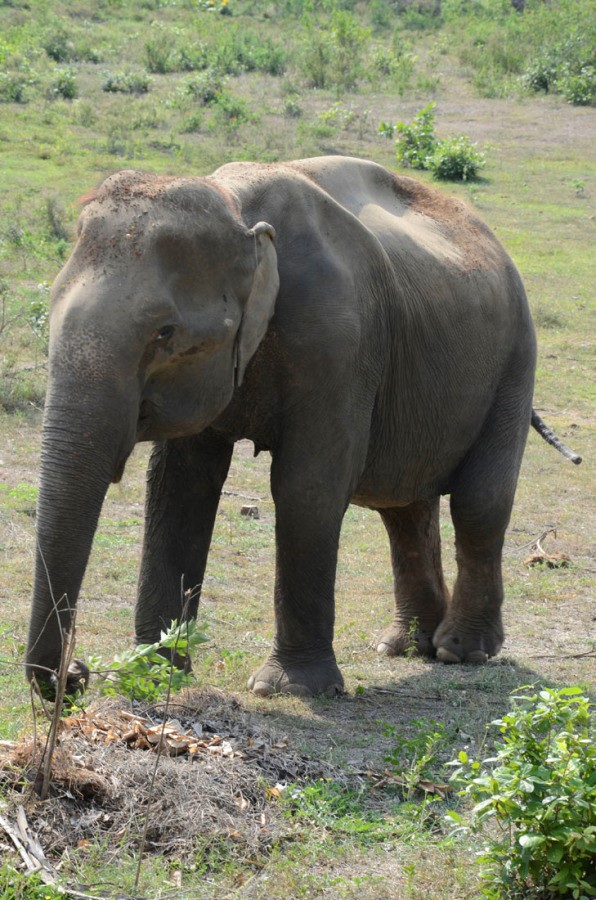 She came from a trekking camp in Chiang Mai, where she spent most of her years serving tourists. She was extremely weak when she first arrived and would not lie down to sleep as she was afraid she would not be able to stand up again.

She is recovered and strong now, but she still leans to the right to not put pressure on her left leg, as it was injured before. Moreover, she is blind in her left eye and her ears and body are much smaller than they should be for an elephant of her age. You will recognize her because she is very small and has a lot of scars on her head.

She is very calm and loves receiving food directly into her mouth. She likes to have alone time and usually heads to the river on her own for an hour or so. Her hobbies include swimming in the river and being bathed. 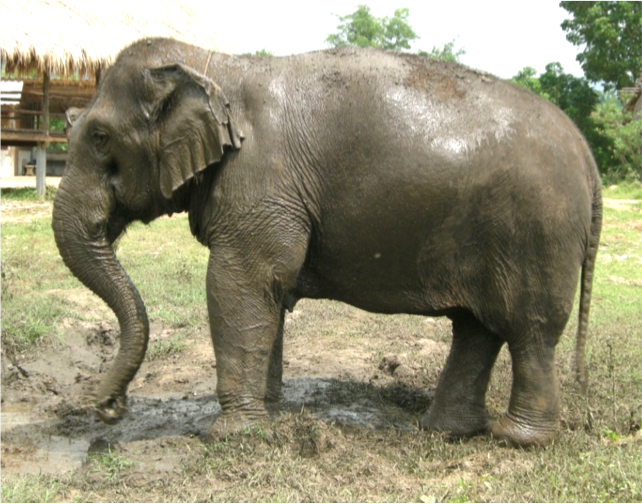 Since an early age, she was working as a tourist attraction at elephant camps, where she was not fed properly. When she reached the age of 50, she was taken out of the camp was she was too weak to carry tourists on her back. Her new job became a street beggar and photo prop for tourists.

Not long after, she was rescued by a kind man and brought into the sanctuary.

Kammoon is in love with Rom Sai, and you will often catch them flirting with each other. A good friend of her is Wasana, who she hangs out with during the morning and it almosts seems as though they gossip about other elephants during this time, as they make sounds with their trunks and feet.

The meaning of the name: The sun and moon of the river 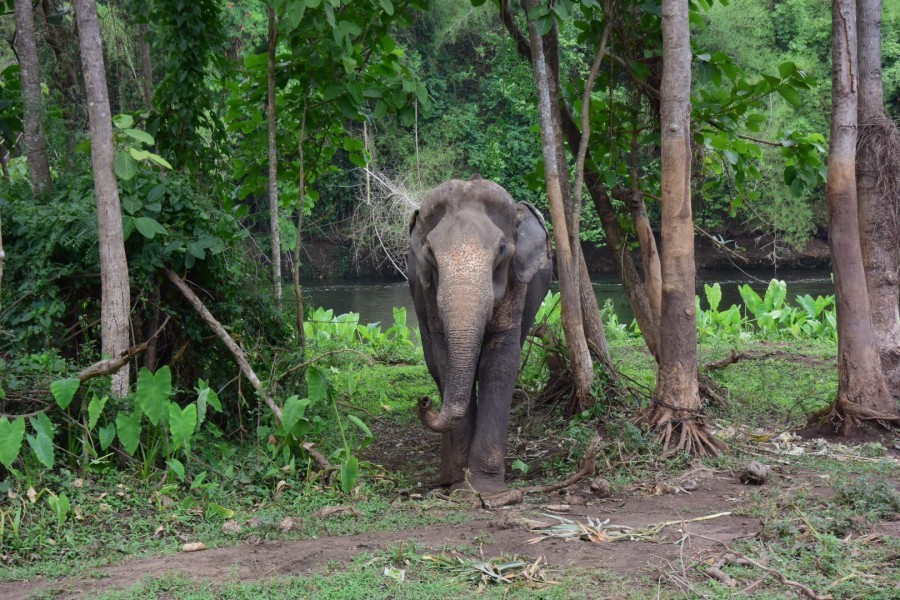 Tong-Kam arrived in 2015 to the sanctuary. Before that, he was working at a trekking camp in Ratchaburi with Touk Ka Ta.

At first, he was very skinny and had wounds on his back caused by carrying around tourists.

Today, Tong-Kam is strong again – he loves swimming in the river during sunny days and eating bananas (he loves being fed directly into his mouth).

The meaning of the name: Golden light beam 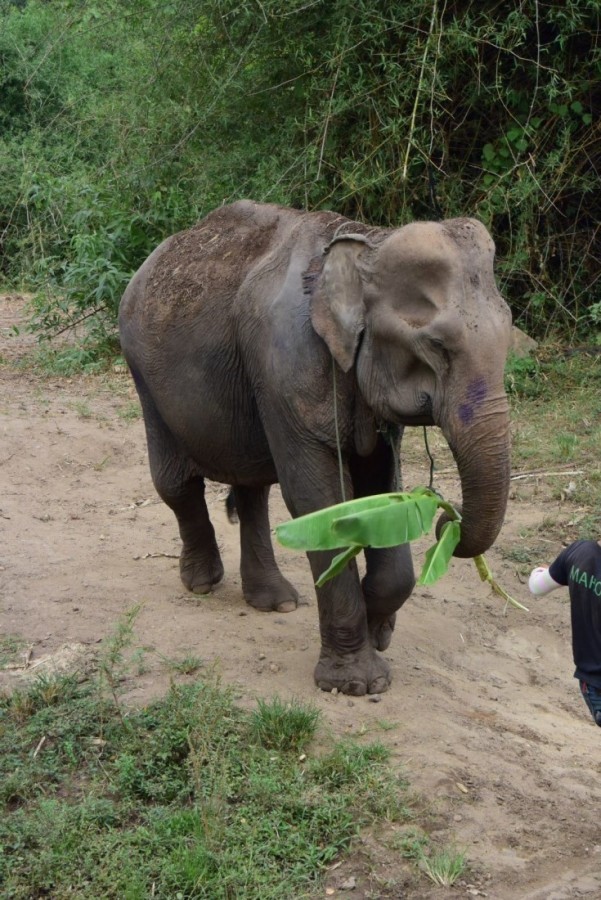 Touk-Ka-Ta arrived one month before Tong-Kam after working at the same camp in Ratchaburi.

He was very skinny but was able to walk very fast. Today, she is a strong elephant who loves yellow bananas and papaya.

The meaning of the name: Barbie doll 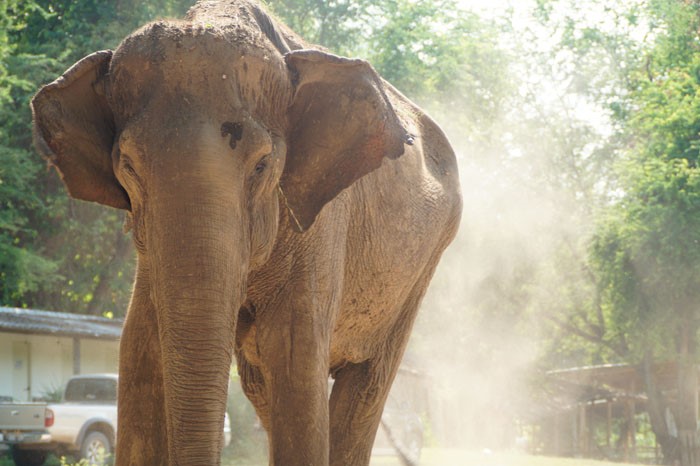 She came to the sanctuary from a trekking camp in the beginning of April 2014. When she first arrived

She previously worked at a trekking camp but arrived at the sanctuary on April 2014 in a very weak state. It took a while to get her recovered from malnutrition but has since gained a lot of weight and strength.

As of March 2015, Tangmo began to enjoy baths. Before this, however, she seemed to be afraid of water, which is very unusual for an elephant as they tend to love being in the water. She would avoid going into the river and would only drink from a hose.

She spent her life working in a trekking camp in Pattaya before she was rescued by S&J and brought into the sanctuary on 2011, with severe malnourishment.

She tends to have mood swings, but with time, she has become more peaceful and has found a circle with the rest of the elephants.

The meaning of the name: Good luck 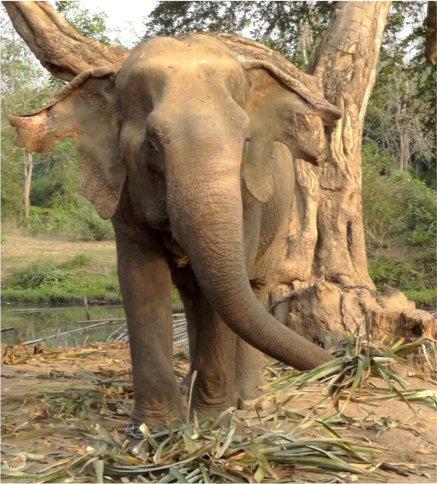 Samboon was one of the first elephants in the sanctuary. She was previously used for logging and begging on the street before she collapsed at a trekking camp. After the incident, she was unable to stand up on her own.

She was rescued by a kind-hearted man and donated to the sanctuary.

Malee, another elephant, is a very close friend of hers and you will usually spot them hanging out together.

The meaning of the name: Complete 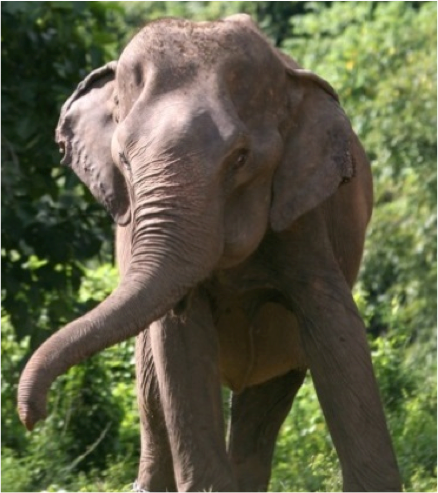 Lam Duan is blind and her exact date of birth is unknown. She is the only elephant at the sanctuary with a female mahout, who takes special care of her and sings to her every since we found out that Lam Duan is fond of music.

Lam Duan was brought from Koh Samui by her original owners in 2012. She spent most of her life logging trees before the practice was banned by the Thai government. Afterwards, she worked at a tourist trekking camp for 10 years.

After thirty years of hard work, her owners decided they wanted to give her a better life and brought her to the sanctuary to retire.

The meaning of the name: Tree with yellow flowers

Before logging was banned in Thailand, she worked in this area. Afterward, she worked for twenty years in a trekking camp. However, after her owner realized the working conditions she was forced to work in, he decided to bring her into the sanctuary to give her a better life. 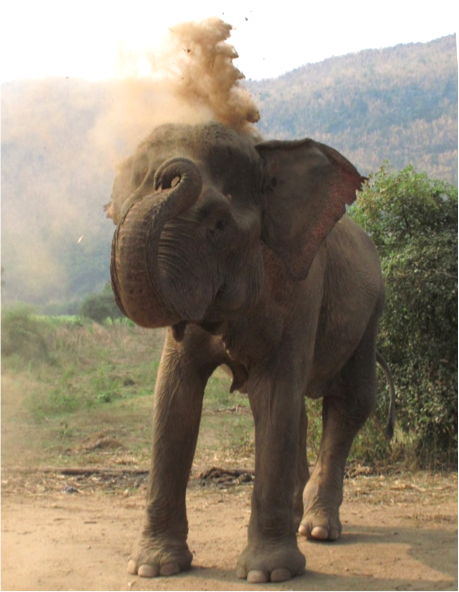 Malee was one of the first elephants to live in the sanctuary. Before arriving here, she worked in the streets of Bangkok, where she was hit by a car, an accident from which she was never able to fully heal from. Now, she tries for balance on three legs as she avoids putting weight on the leg that was hit during the accident.

She is very close with Samboon – you can ofter spot them gossiping throughout the day!

The meaning of the name: Beautiful flower 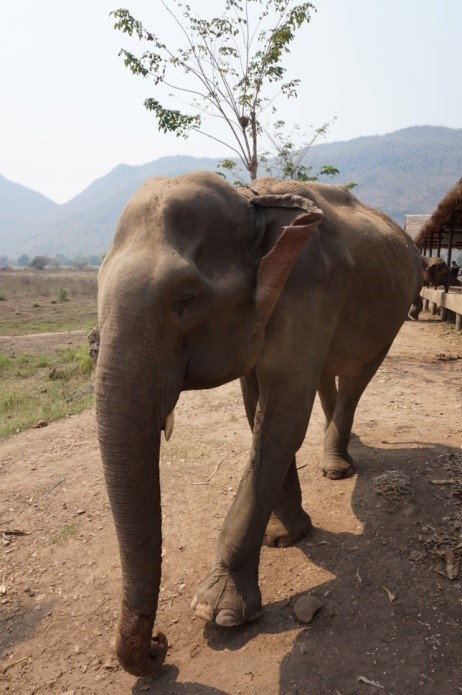 Together with Tong Kram, she arrived in early 2015 from a trekking camp. She is easy to recognize as she has a small tusk on her left side.

She is what you can call a “star”. She is very agile with her trunk and is able to pick flower branches and play football. She is very strong and versatile.

The meaning of the name: Red bull 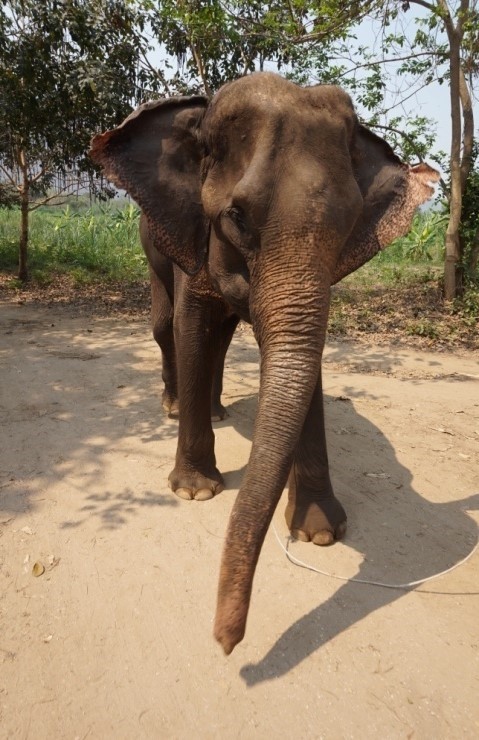 Tong Kam came from working at the same camp as Kating Daeng, where she had to carry tourists around. When she first arrived, she had a huge scar on her bag caused by the heavy seat and weight she was forced to carry on a daily basis. Moreover, she was very malnourhished as she was only fed once a day by her owners.

She was rescued and sent to the sanctuary to get treated by a veterinarian, but they decided to keep her here until she recovers. She has a hernia, which is being treated by her mahout.

She gets along well with the rest of the elephants and loves the peace and quite. She adores bathing in the river with her companions, too! 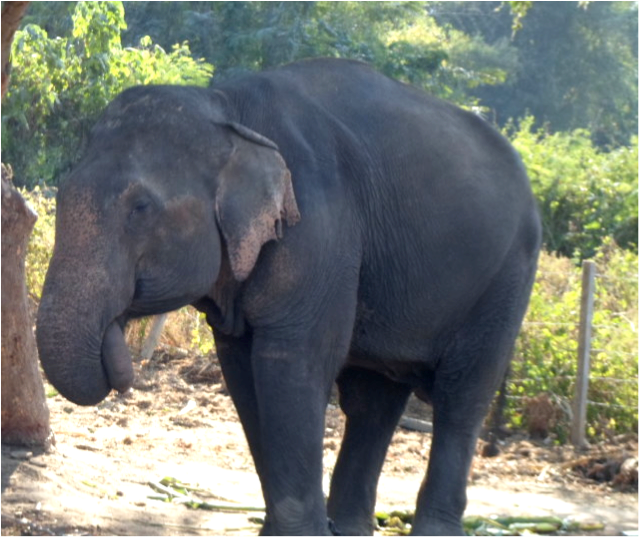 Rom Sai worked in the jungle of Northern Thailand all his life. While working, a tree branch blinded his left eye before a fundraising campaign was set up by the president of Kasikorn Bank to purchase Rom Sai and save him

Rom Sai is quite the playboy and loves flirting with Somboon, Male and Kammon (his true love).

He is very playful and treats Nghokoh, the youngest elephant as though he was his own son.

The meaning of the name: Sacred tree 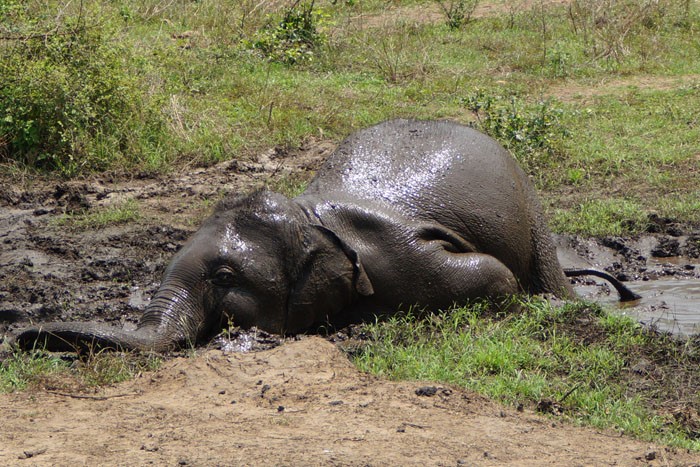 His planned future was to work on the streets of Bangkok but was rescued by a company called Ngo-Hok.

While he certainly is very cute and is very playful, we still have to be careful around him.

Nhohok has a very special relationship with Rom Sai, as he sees him as a father figure and acts very calmly when around him.

The meaning of the name: Five Star

Find out more about working with these elephants…