IVI have public health & nutrition projects in several different countries. One of the most popular of those countires is Fiji. Here is a transcript from a podcast by Jules Galloway, our Fiji nutrition coordinator. She talks about what we get up to in Fiji and the sorts of things volunteers can help with. Our nutrition projects are well suited to anyone studying (or qualified) in a medical related field and can add great experience to your resume!

Fiji Nutrition project- What We Do

“Hello and welcome to a slightly different episode to my usual style this week. I have been meaning to fill you in on some of my adventures overseas, so yeah, this week is the week. Now as you may know, if you’ve been following me on social media, I take off to Fiji about 4 times a year to go and work on a nutrition project that’s very close to my heart. You see, when I’m not sorting out women with adrenal fatigue and pyrrole disorder in my clinic, and when I’m not running my online program, I moonlight at the Fiji Nutrition Coordinator for Involvement Volunteers International (also known as IVI).

IVI are a charity organisation based on the Gold Coast, sending volunteers to communities all round the world, including the Pacific Islands, Bali, Philippines, Greece, India and Nepal, just to name a few! I became involved with IVI about a year and a half ago now, when I went on a trip as a volunteer to Greece and I went to go and work on the refugee camps over there. It was an amazing experience, a really awesome experience and one of the best things I’ve ever done. If you want to hear a bit more about those, you can go back over to one of my older episodes (podcasts). There is episode 37, the one with Lauren Lacey, she’s the director of IVI and we have a chat about what IVI does. In episodes 42, 43 and 44, that’s when I go over my trip to Greece and you can find out what I got up to over there. 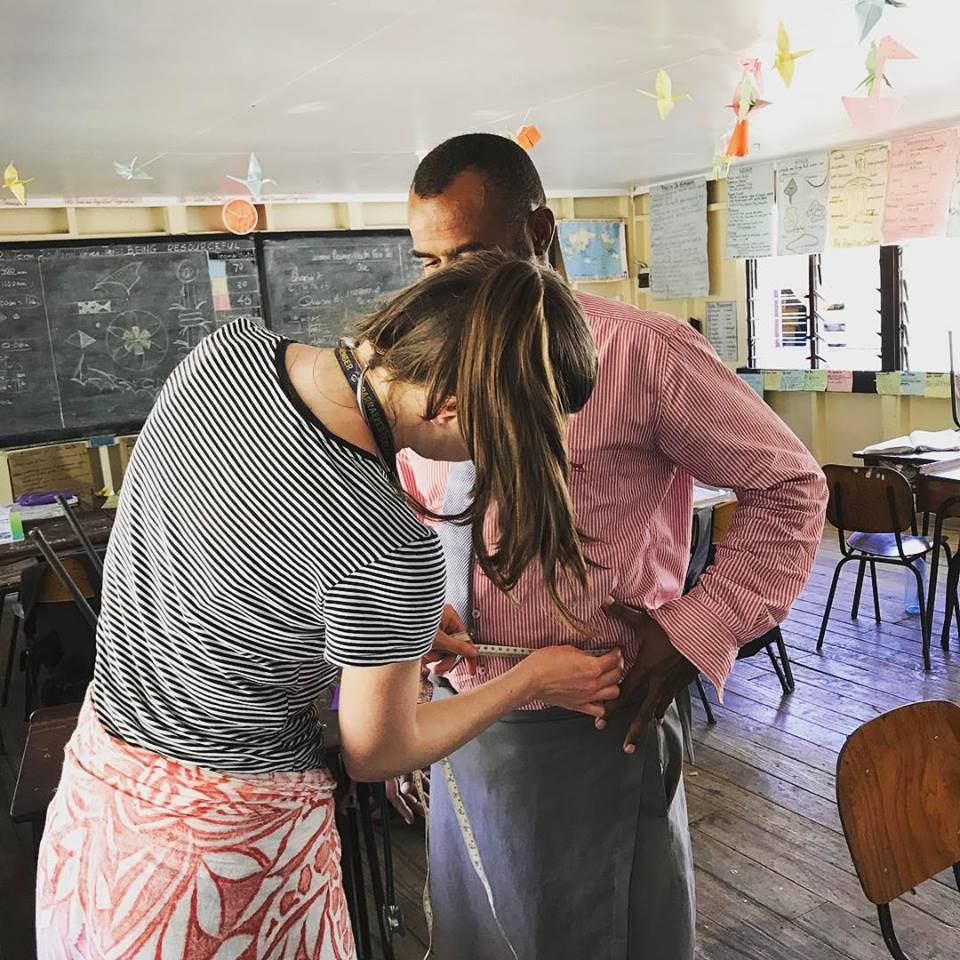 I’ll tell you a little bit about IVI and what we do over in Fiji. So long story short, I went to Greece with Lauren, we got along like a house on fire, I really love working with Involvement Volunteers International, and then this opportunity came up to start something in Fiji. Lauren said, “do you want to be the Fiji nutrition coordinator?!” and I was like “uh yesss! It was a hell yeah! For me!”.

We did do some health checks while we were over there, but it wasn’t too many, just a few dozen. Since then I’ve done another three trips. The last trip that’s just gone, that was my fourth trip to Fiji and that was blown out to seven volunteers, plus me. The last time we went, we did over 800 health checks on Fijian people. The next trip looks like it’s going to be 14 volunteers and we’re even going to divide up into 3 teams and go all over Fiji, and hopefully try for at least 1000 health checks.

It just keeps on growing and growing. Soon, I’m hoping we can start looking at other Pacific hotspots, we’ve got places like Vanuatu in our sights as well. Our focus is on education and diabetes prevention, so there’s a lot of work to do. I don’t know if you know much about Fiji, but the images that get presented to us here in Australia is you know; resorts, holidays, cocktails, islands, surfing, fishing, beautiful beaches, etc. And that’s all definitely part of Fiji but then there’s the ‘real’ Fiji as well. 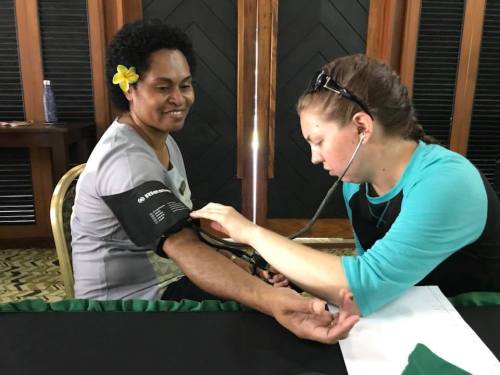 The ‘real’ Fiji are in all kinds of trouble with their health, in fact a report came about the week before I went last, and one of the people we work with over there forwarded a news article to me. It was in their paper, and it turns out that some studies have been done and it turns out that Fiji is now number one in the world for type 2 diabetes. They have out ranked everyone; Australia, America…all the other countries. Number one in the world for diabetes, and it looks like about 1 in 3. So, 1 in 3 adults over there is going to be getting some sort of type 2 diabetes at some stage in their life.

This is really tough to see this happening because they are such beautiful people, but it’s also so preventable. So, we’re going over there with the view to do a lot of education and health checks, to help raise awareness and to help pinpoint diseases before they take hold. We want to catch people when they’re pre-diabetic and turn this around before it turns into diabetes and heart disease as well.

So what we do is we go over and we assess and we measure the health of the local people. We’re looking at things like blood pressure, fasting blood glucose, height, weight, we measure their waist circumference to show if they’re at a higher risk category for diabetes. We do all that to raise everyone’s own personal awareness of where their bodies at, where their health is at. Some people can go all their lives, like right into their 33’s, 40’s, 50’s and on, without ever having these checks being done. Its quite common over there for people to be a bit wary about going to the doctors, so some people don’t even know that they’ve got high blood pressure or high blood sugar until its too late.

We’re also increasing awareness of sugar rich foods that people be avoiding, through education. And again, it was mind blowing, the lack of education that was happening around these sorts of foods, especially which foods have got the sugar in them. We do a lot of work showing people which foods have got the sugar, we actually even take props with us now, thanks to the people behind ‘That Sugar Film’, Damon and his crew. I had a chat with someone from that camp and they showed us how to educate people. They said alright, we’ll go and buy the local foods. Go and buy the local tins of baked beans and the fruit juice and jam and the biscuits and all the things. Go and buy them, and then buy a bunch of zip lock bags. Then we got some big bags of sugar, and we measured how much sugar was in each of those products and put in the zip lock bag. We labelled them e.g., ‘baked beans: 42g of sugar’ and then we put down how many teaspoons of sugar that is, say ’10 teaspoons of sugar’. And we would stick that to the baked beans, and we would do the same with the fruit juice, the same with the jam and the biscuits and so on. 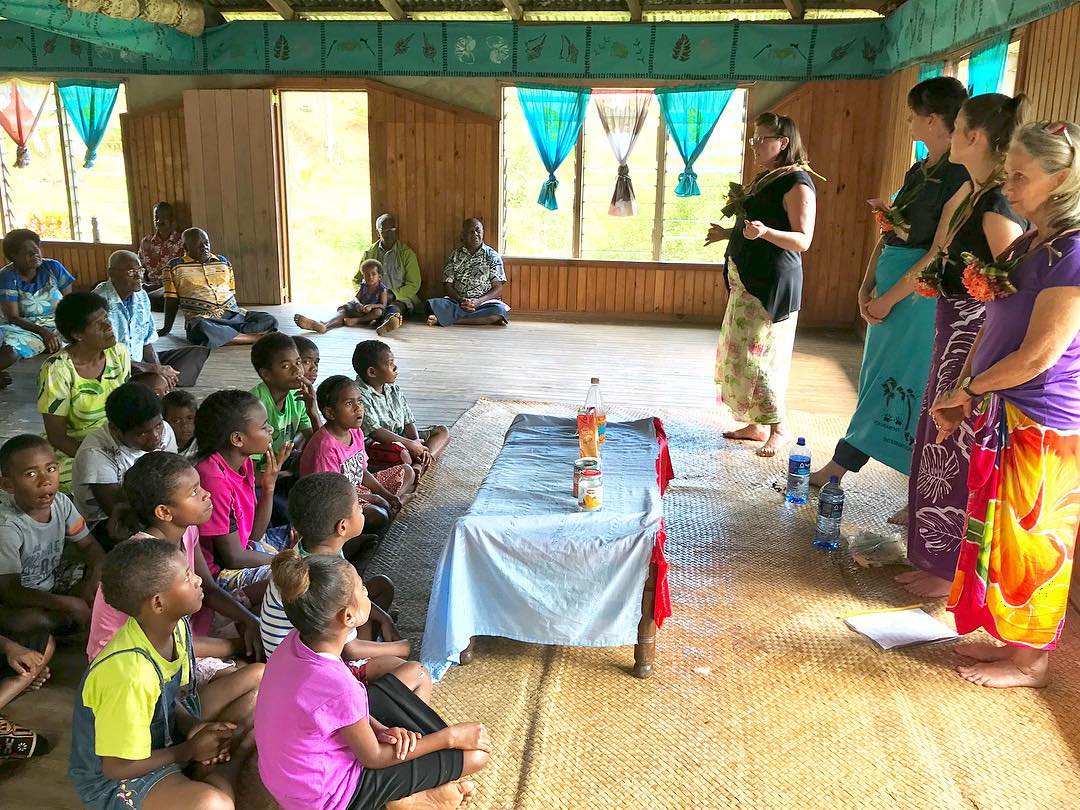 We visually showed people what was in their foods, and their minds were being blown all over the place! Some of the reactions were priceless, we had one lady freaking out because we showed her what was in the flavoured yogurt and she was like “I give this to my daughter every day! My daughters always hyperactive, I never knew why. I’m going to get her off this, I’m going to tell al the other mums at the preschool as well”. We thought “my god, no-ones ever told her this before”.

So we’re doing a lot of sugar education there, both one on one and in groups when people come through for their health checks. We have a little station set up and have all the props laid out and if someone has a high blood glucose reading on the day, they get sent over to the table and asked “do you eat any of these foods?”. And that’s where the education starts to happen.

The great things about having these health checks, is that it’s exposing these people to the concept of having their health checked regularly. Some people who are having their finger pricked to have their blood sugar taken, and it’s funny its always the boys, it’s only a tiny little pin prick if you’ve ever had your blood glucose down, it’s a tiny little pin prick and a drop of blood. But some people have been putting it off being done, because they thought it was going to hurt a lot and they were scared of the needle. So we’re exposing people to the concept of having these simple checks done and we’re making it normalised. So that they can go home and tell their friends and their family “it doesn’t hurt that much and that its really simple to do and that its not that scary after all”.

Our overall goal, of course, is the improve the health of the local Fijian people. That’s our strategy, it’s all about checking their health and then educating the people.

Jules Galloway is also a qualified naturopath and functional medicine practitioner. Find more about her work on her website.