"Captain and his sisters really treated me like family and it was amazing to be part of that."

I’ve spent 11 weeks in Sri Lanka and it was the best experience I had so far in my life. Sri Lanka is a beautiful country, I love it so much and I consider it as my second home.

I spent my first 8 weeks in Kandy, which was so great because I had the opportunity to help in so many projects.

My first week was the Introduction week which was really fun. We visited some sights like the Temple of the Tooth, a spice garden and a tea factory, which was really great to get to know Kandy. Also I really loved that we got a little insight on the language, the local cuisine and the culture too.

In my first week of project, I was helping in a preschool in Kandy in which we were assisting the teachers and played with the children who were so sweet. Also it was really nice to see how they learn English by playing, drawing and coloring. At first it was kind of hard to communicate with them but it got better the longer you stayed there and they started to trust you and they were always excited to see you coming back the next day. 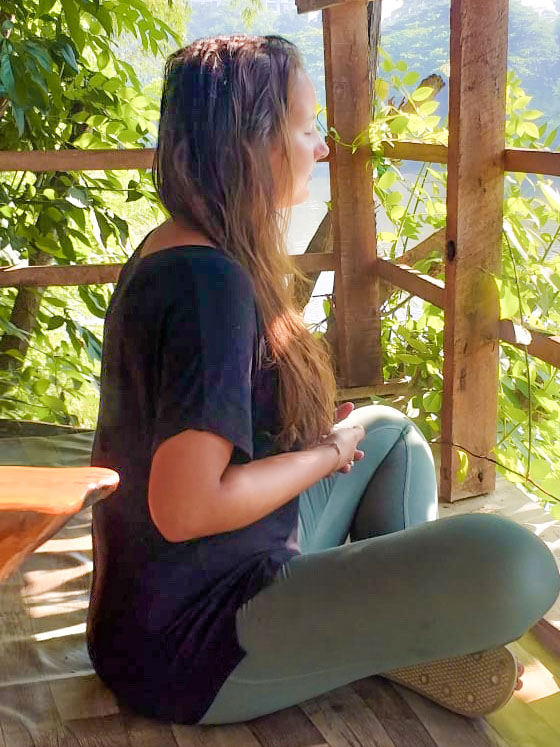 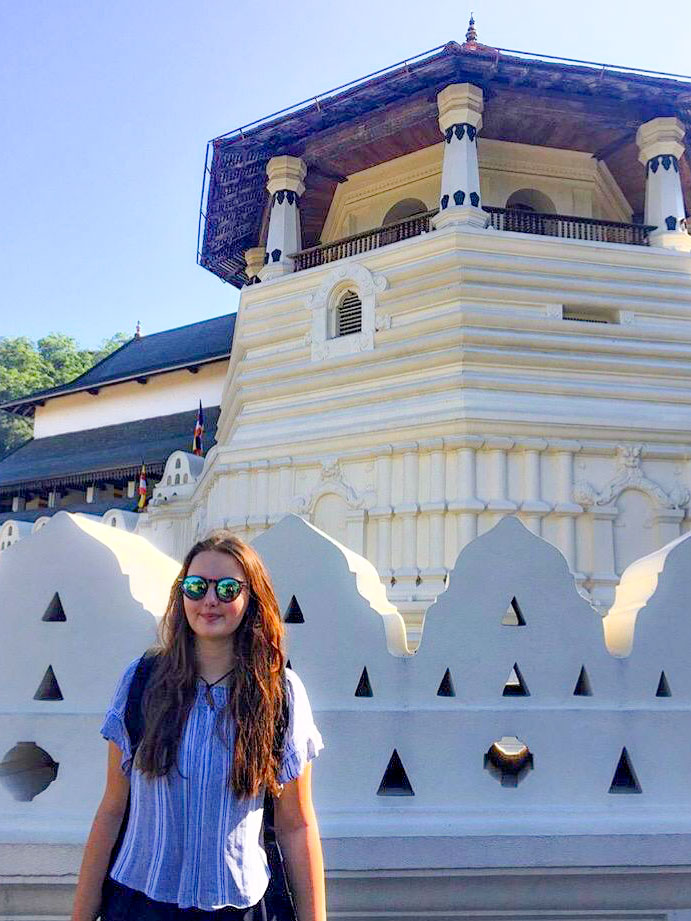 The week after I started to participate in the Special Needs project in Kandy, which was the best experience ever. At first I was kind of nervous because I’ve never worked with people with disabilities and it was a little overwhelming on the first day. However, the next day was amazing! It was so great to see the girls getting excited to see you again and they gave you so much love and they just made me so happy. In the mornings, we did classes with the girls where we could play with them and even taught English to some of them. They were really adorable and we got attached to them so easily. Also what was really amazing was that you really had the feeling that your help there is needed and appreciated.

After the classes it was lunch time and we could help with the feeding and putting the children to sleep, which was also such a great experience. After our lunch break, we usually just played with the girls and gave them the attention they needed so badly. We sang songs with them and danced, carried them around and sometimes painted their nails, which was their and our favorite activity. Everyday, when I went back to the accommodation I was heartbroken because I would have loved to stay there longer. Even after the project, I talked for hours with my friends about the girls and how excited we were to come back the next day. I stayed in that project for one more week because it was so much fun and if I had more time in Sri Lanka I could have stayed there for months. 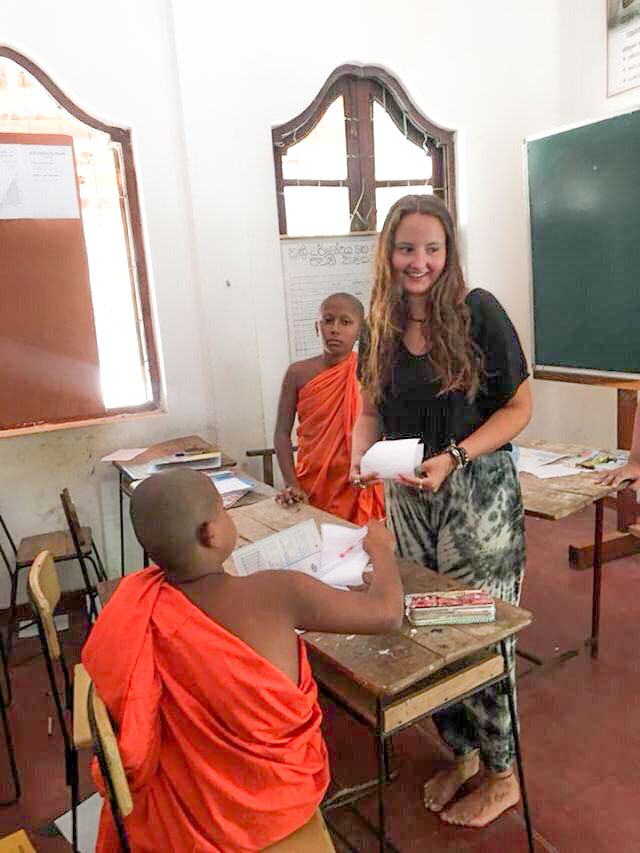 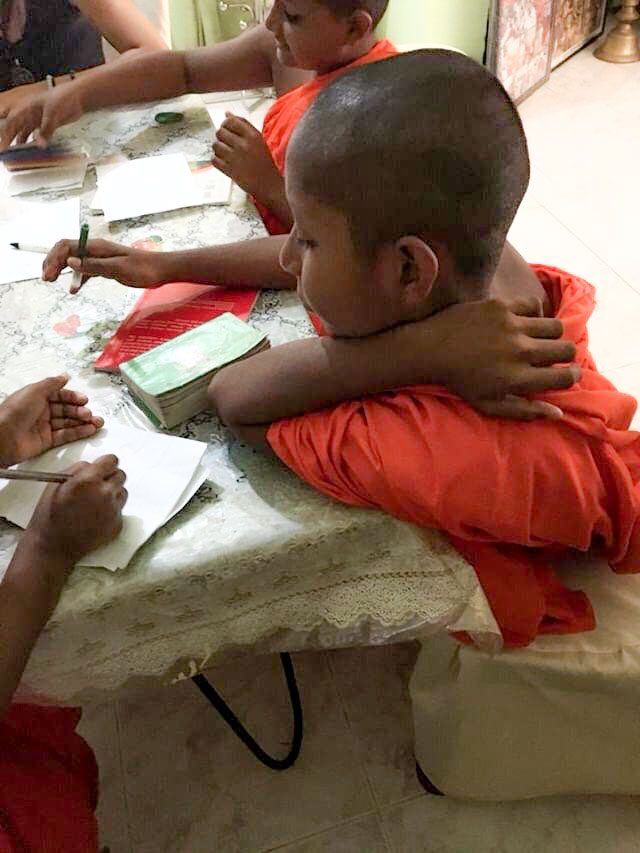 However, I wanted to try some other projects as well, so I went to the Hill Country with some friends to a small town called Hanguranketha, which is like an hour away from Kandy, to participate in a project where we would teach monks in the age between 10 and 16 in a temple and do temple renovation after. The town itself is really peaceful and quiet and it was nice that there were only locals and no tourists because we could get to know the local life there. The accommodation there was really nice as well and the food was so good! Also our coordinator Sura was amazing, she was more like a friend and we could talk to her a lot and she spoke really good English. The project itself was so great as well. The monks were really lovely and I loved teaching them because they were so smart and we could tell that they really wanted to learn.

Also they taught us so much and it was really nice to get an insight on the lives of the monks in the temple. After the lesson, we usually went to the temple and started scraping the old color from the walls to paint them again after. It was pretty physical and sometimes exhausting but all in all it was really great to put your fingerprint on this old temple and working in such a sacred place was a really spiritual experience. Everything there was so peaceful and also I got so attached to the monks, so I was really sad to leave after this week.

On the weekend I went to Unawatuna with my friends I was in the Hill Country with. It was really nice and we had a great time at the beach. 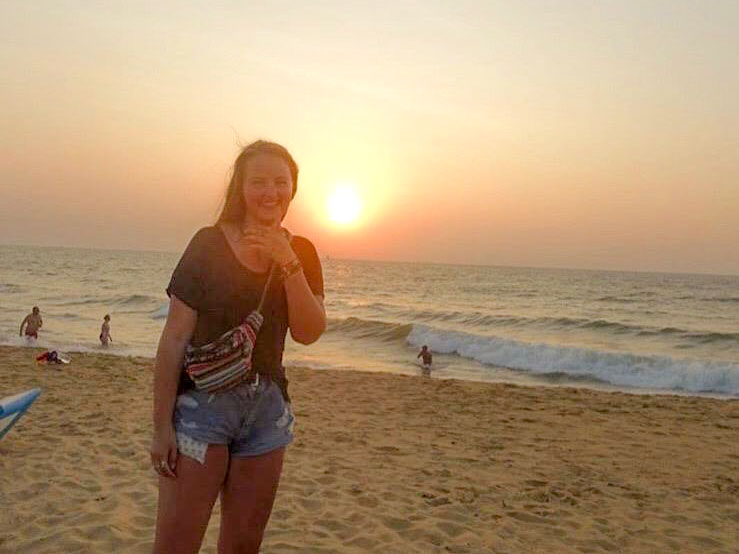 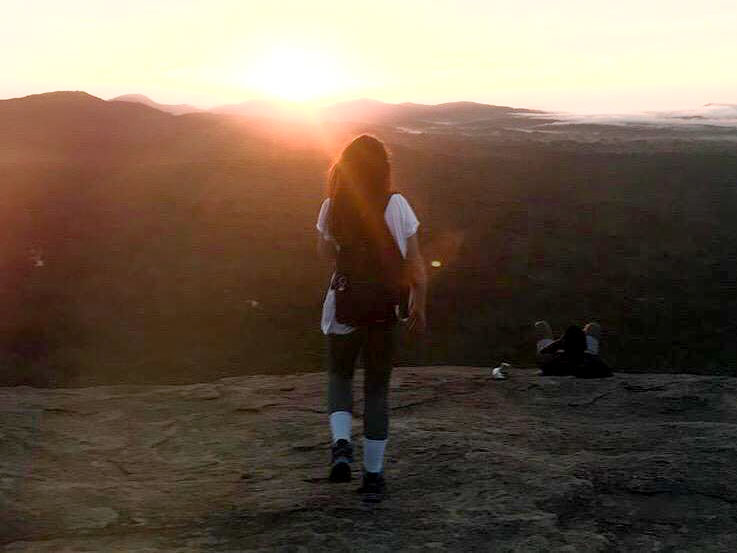 The next week, I went back to Special Needs because I missed the girls so much. It was the same routine as always and it was amazing to see that the girls remembered me and got excited that I came back. This week was kind of sad for me because I knew that it would be the last week I could spend there. I also had so many projects left which I wanted to do. Even though 3 months is such a long time, I felt like it just wasn’t enough. On my last day in the special needs home, I was so heartbroken and some of the girls realized that I wouldn’t come back and started crying and a lot of them gave me paintings and bracelets they made during the classes. It was amazing to see what kind of impact you have on the lives of these women.

The following week. I went to Hill Country again because I loved the project, the people and the town so much. I really missed the monks and also they remembered me and got so excited that I came back. Unfortunately we couldn’t teach them a lot this week because they had a lot of trips to other temples and they had to focus on the Buddhism lessons. However, it was amazing that they always stayed around anyway when we worked at the temple and they talked to me so much, which I really enjoyed.

On my last day there, I could teach them with the other volunteers and we did crosswords with them, which they would solve within seconds – they are so smart! I had to leave the project a day earlier because I went on a weekend trip and the other vollies there told me that the next day the monks asked them where I was and if I would come back, which was amazing to see what kind of an impact I had on them but also heartbreaking because I wouldn’t come back. 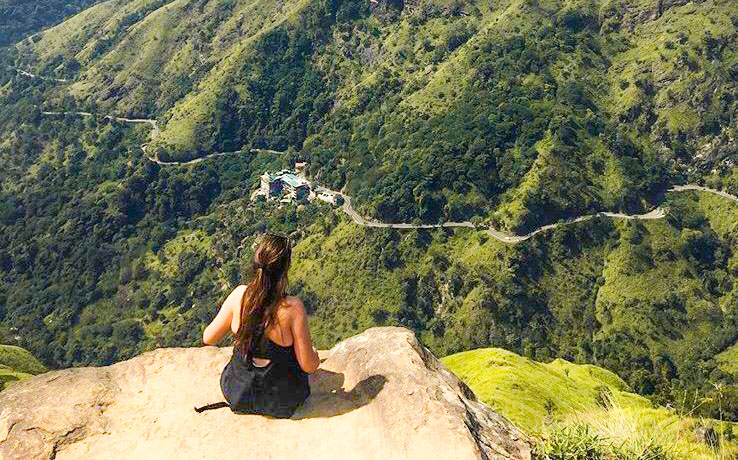 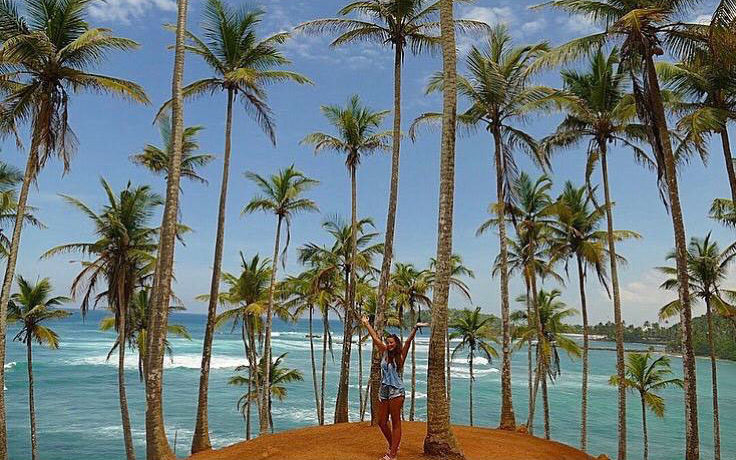 On the weekend, I went back to the beach to Hikkaduwa with my friends, which was really nice again. We enjoyed the time on the beach, got tanned and had some drinks. Also it was crazy to see how different the life on the beach seems compared to the life in Kandy. Everything seems to be more chilled and it was great to have a break from the stress in Kandy.

The next week was my last week in Kandy before I would do projects in other locations. I did the Body and Mind project which was a nice and relaxing experience. I went to a Yoga class at 6 in the morning, which was nice (except for that it was that early) and it was a great experience doing Yoga since I’ve never tried it before. After I went to an Ayurveda therapist who taught me meditation which was a nice experience as well. After I got massages, got different teas, juices and snacks and learned some things about Ayurveda. I really liked this week because it was very relaxing and now I’m even doing Yoga and meditation at home when I have the time.

After that week I was pretty sad to leave Kandy and all of the amazing people there, especially the local staff there. Hemantha is an amazing person who was always there for us and contactable 24/7. He worked so hard and really did an effort to make sure we had a good time and that everything was fine. Also the Aunties who cooked for us were so lovely and they made us feel like family, which was so great. Also their food was amazing! 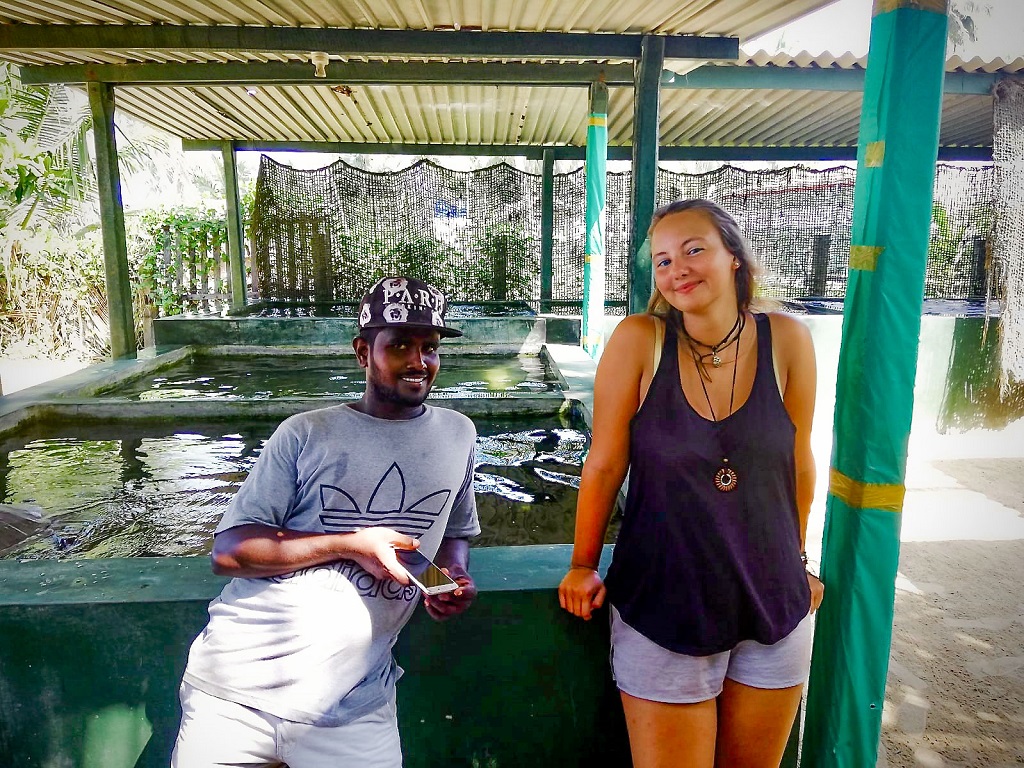 The next and last project I did was the Turtle Conservation project in Ambalangoda which I LOVED! Actually I wanted to do that project for only one week but it was so amazing that I stayed there for 3 weeks in total and I’m so glad I did it. The accommodation, the food and the staff were the best. Captain and his sisters really treated me like family and it was amazing to be part of that. Also the project itself was so much fun! Our coordinator Chandimal became a really good friend of mine and working with him and the turtles was incredible.

It was also so interesting to learn about the turtles and their disabilities. Also it opened my eyes about how much plastic is coming into the oceans and how much harm it brings to the animals living there. During the project we fed and cleaned the turtles, cleaned the beach and the tanks they live in. We also collected sea weed to feed it to the green turtles who love it. My favorite thing was that baby turtles hatched while I was there and returning them to the ocean was a life-changing experience I was able to witness twice.

Also living and working directly at the beach was the best and most of my free time I was spending there. Ambalangoda is such a nice place and I can’t recommend going there enough! It’s amazing that there a few tourists only and I made so many local friends there and since I was spending so much time in Sri Lanka already I even understood it most of the time when they were talking to each other in Sinhala. My friends were always saying I was a local by heart. 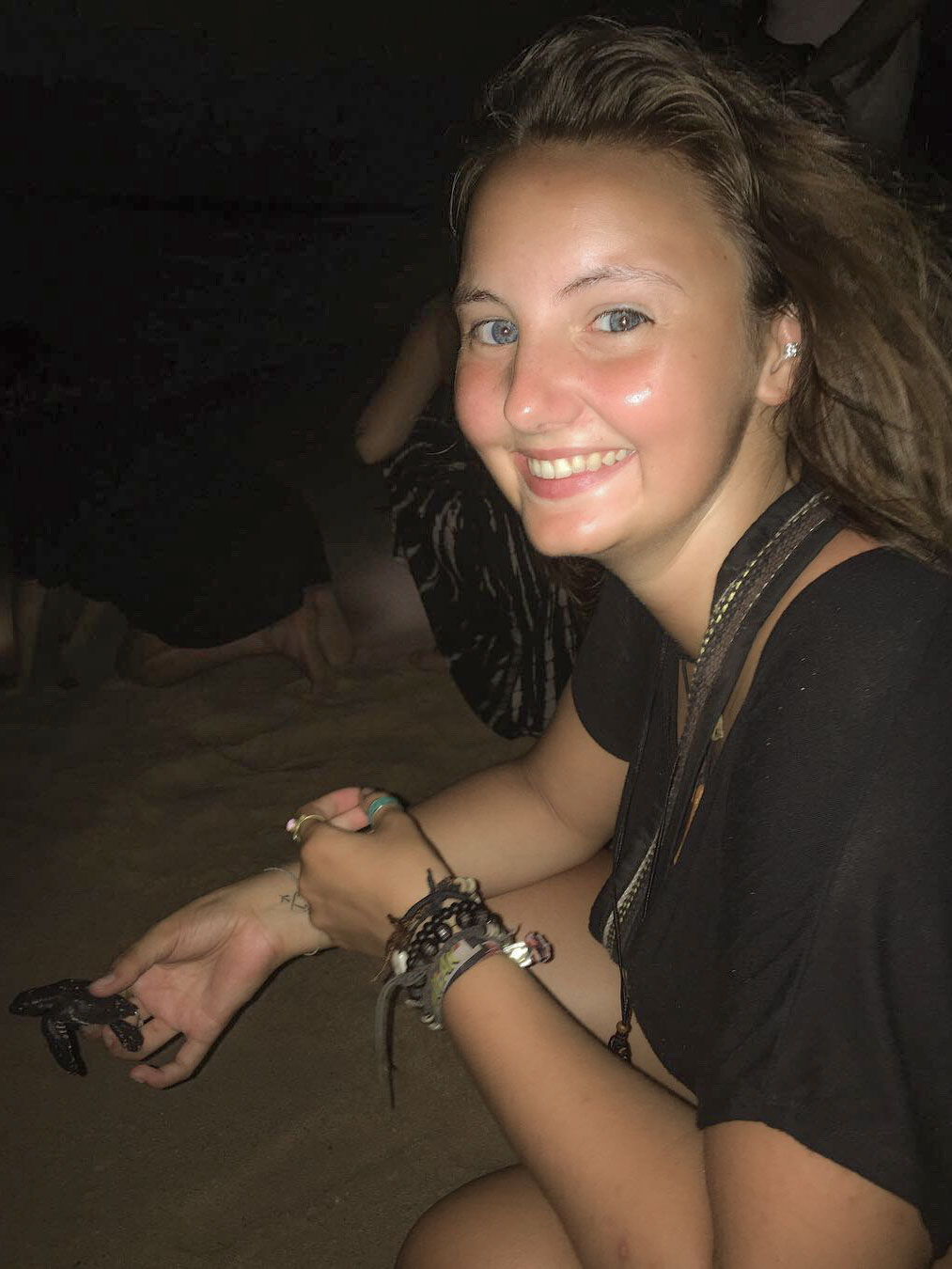 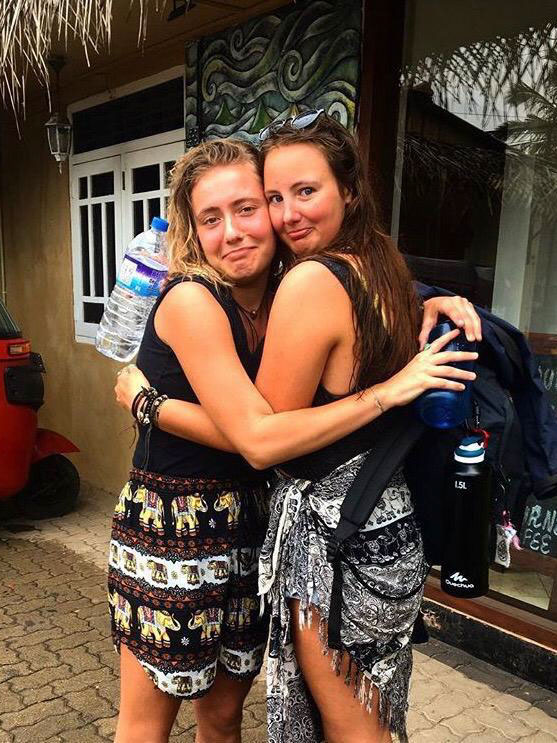 All in all, it was an amazing experience and I love Sri Lanka so much and consider it my home. I met so many amazing people from all over the world and got so many good friends. On my flight back I cried the whole time because I never wanted to leave Sri Lanka. Anyway, I had to go and now I’m back in Germany and I miss this beautiful country with its beautiful people and nature every second of the day and I’ll come back home as soon as I can!

Thanks a lot to IVI for giving me this amazing opportunity to help so many people and do so much good in this beautiful country! I will never forget that amazing experience and I can’t recommend Sri Lanka enough!