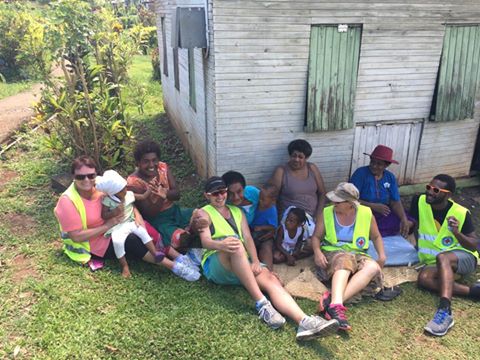 Thomas Hinterdorfer
Extreme Weather Chaser
Fiji 2016
As this is posted, I’ll be mid air between Nadi and Brisbane. I could post 1000 photos to describe my trip but there are only a few that do it justice. What I’m leaving behind is hard. This has changed my life.
• The estimated recovery time is expected between 18 and 24 months
• Power won’t be fully restored for another 6 months
• The state of emergency ends tomorrow (one month tomorrow), however it’s expected to be extended for another 1-2 months for some regions
• Homes and businesses won’t be touched for many weeks through the North Central regions
• The maritime Islands will take an extremely long time to assess as it’s costing $20,000FJ per 3-4 day trip out there to assess them – some of these areas are catastrophically damaged compared to Viti Levu (main island)
• There is a severe lack of timber and seeds at the moment due to the agricultural damage caused by Winston
• Sugar and Rice farming have also significantly suffered
Emotionally, lives have been changed forever. Generations have been changed forever. I have the utmost respect for the Fijian community.. During their darkest days, all they do is smile. They’re so welcoming and courteous. They bend over backwards just to make your stay all the more memorable.
If you want to help, head over to the Involvement Volunteers Internationaland register. It was well worth it for me as I was able to visit a large area of the country and see their way of living, their cultures and heritages and experience the beauty of Fiji.
Thank you for the ongoing support and interaction on here. I’ve received a phenomenal amount of PM’s both through the page and my personal account which is overwhelming and humbling. I wanted to go and help a country in its darkest hours, and while it may not be a lot – I feel I’ve contributed somewhere. I will visit here again.

DAY 5 IN FIJI: Unquestionably the hardest day as I headed into the war zone. Seeing things only 5m from you which leave you speechless. Talking to locals and knowing no words or actions will be enough to console them.
One month on and the area between Ba and Rakiraki basically looks untouched from those first photos apart from a few tarps.
Virtually every tree on the Coastal side of the mountains is stripped an is now a bare naked stick stuck in the ground. There is no powerwhatsoever.
I spoke to a mother near Rakiraki (just East of town), she had 2 young kids both under 4. I asked only question, because her answer left me speechless. “How bad was it?”, her response “I thought we were dead”. I then gave her a hug and she showed me through her little community.
The schools are functioning under the worst conditions. They barely have a roof over their heads now, and if the school is destroyed they now sit out under tents because life needs to go on basically.
Seeing palm tree after palm tree snapped in half and knowing fibres that usually bend have snapped to the point they look sheared off. It’s confronting.
Images:
• 6 trees crushing a house, a month on, SW of Rakiraki
• The outskirts of Rakiraki, houses still without roofs
• An unliveable house NE of Rakiraki
• 3 houses on a hill destroyed near Ellington Wharf
• The local church just outside of Nanokonoko
• Every tree stripped on the mountainside which faces the Northern Central Coast
• A school near Ba, which has lost everything. 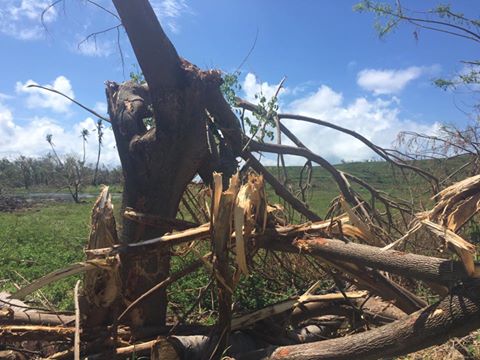 DAY 4 OF FIJI RECOVERY: Today was a day of chopping (literally) and changing.
After a late start, it was going to be a day of assessment and possible distribution of required to some villages and settlements. About 5mins before heading out, the heavens exploded! So the plan was changed to harvesting and gathering.
We set out NE of Lautoka and headed for the Coastline where we headed into a *jungle* or what should be referred to as dense bush land and the aim was to cut down as many trees as possible so that we can set up for tomorrow where we will teach people how to rebuild houses using trees as structures.
After 2 hours with the scattered heavy showers and blazing heat and humidity, the feels like temperature pushed 44c at one stage (some of the most physically exhausting conditions I’ve ever felt – Darwin would’ve been put to shame for heat/humidity). It was some of the hardest work I’ve ever done physically. Chopping down over 15 individual trees using just a machete and axe.
The scenes in the place were phenomenal. I’m positive either >330km/h winds or a tornado ripped through the region during the Cyclones eye wall passing. Every tree had damage to it or snapped, some had trunks like in image 1 that shouldn’t be snapped.
Images:
• Large tree that was sliced. 3 surrounding trees were snapped in different directions (why I believe there was a tornado)
• The result of the trees, about 40 trees there which will be great for tomorrow
• In the action!
• the train track we walked along
Tomorrow is bound to be a big day! 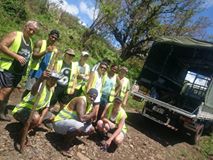 Heavens just exploded. Change of plans now today – no assessment of distribution, but heading into the jungle to cut wood and gather supplies for tomorrow

If I can take one thing away from this trip, and pass it onto anyone.. It’s that this is the most rewarding and exciting experience ever.
Yes you see the horror, the devastation, the anguish and the despair. At the end of the day though, you see a country. I’ve seen the mountains of Fiji, I’ve seen the views, I’ve seen the dense bush land and the busy city life. I’ve met important people and I’ve helped important people. At the end of it all… You can physically and emotionally feel the gratitude people have, and it’s overwhelming.

If you can, take the opportunity to help out. It doesn’t have to be Fiji, it can be any country. That way you’ll experience a different culture, a different way of living and whilst the work is hard, it’s the most satisfying thing I’ve probably ever done in my life. There are things I could never share, but there are memories that I definitely would never have experienced. 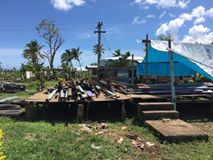 DAY 2 FIJI RECOVERY: Today was a quieter day in regards to yesterday. We headed to one village just outside of Lautoka (about a 10min drive). The village is called Wainivakasoso and the scenes were heartbreaking.
It was a short stop where we were able to mingle with the village community and distribute aid supplies. It was attempting to reach the low to mid 33s and with no breeze at all it felt unbearable at times.
Images 1-3 are from the village, showing the state that it’s in. Many many homes have significant damage in one way or another.

We then went and met with the parents of the prime minister of the Fiji Red Cross where we stayed for nearly 90mins, cleaning up debris for storage in their yard, places tarpaulins on the patio and burned any loose or useless pieces of debris.

Looking forward to another day tomorrow, I’ve heard it’s going to be a big one but who knows. 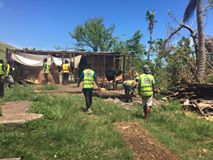 DAY 1: We visited 2 villages NE of Lautoka. The heat itself puts Darwin to shame, but there are some stories I simply can’t share on Facebook.
The first village being Naviyago had considerable damage where images 1-3 are completely destroyed. The first image is a house which is no bigger than my bedroom, it’s home to a family of 4. Since the cyclone hit, they’ve had no water at all, no cooking utensils, no clothing, no roof, nothing. We gave them cooking utensils, water, tarps and some clothes which were given to us by UNICEF.

Image 4 is of the Chiefs House in the second village we visited (Vitogo). It was completely destroyed in Winston with repairs only just beginning.
I’ve been told it will take 6 months for power to be restored to everyone. Which is hard to fathom as 7 months without power is basically unheard of in Australia. All things aside, community spirit is amazing and the people are amazing. They’re so warm and welcoming and it helps you push that little bit harder – even if it is 32c and 91% humidity like yesterday.

Hopefully my account doesn’t get locked again and I can share live updates with you! Forecasts will be updated tonight.